BY Heather Hughes on July 12, 2019 | Comments: one comment
Related : Soap Opera, Spoiler, Television, The Young and the Restless 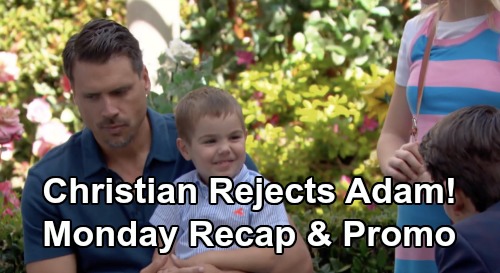 The Young and the Restless (Y&R) spoilers update and recap for Monday, July 15, tease that Faith Newman (Alyvia Alyn Lind) will return home from camp. She’ll be with Sharon Newman (Sharon Case) at Crimson Lights as Adam Newman (Mark Grossman) lurks nearby. He’ll overhear them talking about meeting up with Christian Newman (Jude and Ozzy McGuigen) later, but Sharon won’t mention it when he walks over.

Faith will greet Adam, who’ll hope she isn’t freaked out by the sight of a ghost. Y&R spoilers say Faith won’t be bothered. Once Adam and Sharon are alone, they’ll discuss Chelsea Newman’s (Melissa Claire Egan) return and her decision to stay with Nick Newman (Joshua Morrow). Afterward, Faith will rejoin Sharon and head off to the park with her, but sneaky Adam will follow them.

At the park, Faith will think Sharon’s mood shifted after her encounter with Adam. Moments later, Nick will show up with Christian and the kids will scamper off to the jungle gym. That’ll leave Nick to rant about Adam and ask when Sharon’s going to see him for who he really is. Sharon won’t feel like Nick’s seeing Chelsea for who she really is either.

When Faith comes back over with Christian, she’ll point out that they can hear their conversation. The Young and the Restless spoilers say Adam will appear next and bring tension. He’ll stoop down to the kid’s level and hope they can spend more time together. Adam will think maybe they could start by getting a popsicle, but Christian won’t be interested and Nick wouldn’t let him anyway.

Once Nick leaves with Christian and Faith, Sharon will chew Adam out. She’ll feel like he used her to gain access to Christian. Sharon will also bring up the murder accusation updates she got from Nick. She’ll snap that she understands all the warnings now and can see that Adam’s “a selfish, coldhearted bastard.”

After Rey spots Faith at the coffeehouse, he’ll learn Sharon isn’t too happy with Adam right now. Rey will find Sharon alone in the park, where they’ll have a heart-to-heart about their Adam issues. He’ll think he shouldn’t handled their conflict differently, but Sharon will note that he was right about Adam. Once Rey notes that Adam got in Sharon’s head but not her heart, they’ll lean in for a kiss.

Back with Chelsea, she’ll march over to the penthouse and give Adam a piece of her mind. Chelsea will contend that the Adam she knew wouldn’t have tried to frame her for murder. He never would’ve let her go down for a crime she didn’t commit. Adam will insist he was better with Chelsea and argue that he can’t do this without her.

The Young and the Restless spoilers say Chelsea will think it’s just too much work to be with Adam. She’ll believe Adam’s choosing to be someone else, so their lack of a reunion is on him. Adam will note that things could’ve been different before telling Chelsea to text or call next time. He’ll suggest that better yet, Chelsea shouldn’t stop by at all.

Elsewhere, Rey will let Lola Rosales (Sasha Calle) know her father wants to walk her down the aisle and has been in touch with Celeste Rosales (Eva LaRue). Once Celeste appears, Lola will rage over her mom’s reconnection with her dad. She’ll insist he hasn’t changed, but Celeste will disagree. When Lola demands to know if Celeste’s fallen in love again, her mom won’t give her an answer.

The Young and the Restless spoilers say Celeste will be a big believer in forgiveness. She’ll argue that Lola will regret it if her dad’s not at the wedding, but her daughter won’t allow it. Lola will contend that if her father shows up, she’ll call the whole thing off!

It sounds like an action-packed episode’s on the way. We’ll keep you posted as other Y&R news comes in. Stay tuned to the CBS soap and don’t forget to check CDL often for the latest Young and the Restless spoilers, updates and news.