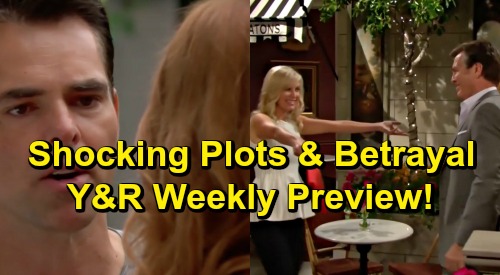 The Young and the Restless (Y&R) spoilers for the week of July 15-19 tease that we’ll see some desperate pleas and stunning moves. For starters, Adam Newman (Mark Grossman) will once again beg Chelsea Newman (Melissa Claire Egan) to reunite. He’ll want Chelsea to see that they’re each other’s destiny, but she’ll feel like he’s a different person these days.

Adam may admit he sometimes does drastic things to get what he wants. He’s a passionate fighter, which can lead to ill-advised decisions that backfire. However, Adam will assure Chelsea that he can be the man she needs him to be. He’ll insist he was better when he was with her. Adam will contend that he can’t do this without Chelsea in his life, but she’ll be adamant that she wants her freedom.

The Young and the Restless spoilers say Chelsea will remain drawn to dependable Nick, so Adam’s dark side could take over. Without a family to keep him grounded, Adam could become more dangerous than ever! He’ll cross just about any line if he feels it’ll help him achieve his goals.

Meanwhile, Jack Abbott (Peter Bergman) will jet off to Paris on a mission to see his sister. He’ll happily greet Ashley Abbott (Eileen Davidson) outside a very fake-looking yet adorable Parisian café. Ashley will welcome Jack to Paris before giving him a tour of My Beauty. They’ll also catch up over lunch, but Ashley will eventually have to ask why Jack was so determined to meet with her.

The Young and the Restless spoilers say Jack will fill Ashley in on an imminent Jabot disaster. He’ll fear major trouble’s brewing and seek Ashley’s help to prevent it. The Abbotts tend to come together in times of crisis, so Ash should agree to help. It appears Phyllis Summers (Michelle Stafford) may have something to do with all this. Jack will just want to make sure his family’s company is protected.

A Jabot-My Beauty merger might make them an unstoppable force. Will Jack and Ashley make a mutually beneficial deal? Over with Kevin Fisher (Greg Rikaart), he’ll assure Michael Baldwin (Christian LeBlanc) that everything’s fine. Michael, on the other hand, won’t be so sure. He’ll worry about Adam pushing Kevin down a risky path, but Kevin will insist he’d tell Michael if something was up.

Michael will disagree and contend that he’d be the last person Kevin would tell. He’ll ultimately convince Kevin that they have to tackle the problem head-on. Y&R spoilers say Michael and Kevin will come up with a new scheme. They’ll hope they can outsmart Adam, but this sounds like something that could backfire spectacularly.

Finally, Phyllis will have a run-in with Billy Abbott (Jason Thompson). He’ll give her a hard time about her Adam alliance, but Phyllis won’t think Billy’s giving her enough credit. She’ll wonder if Billy or anyone else has considered that she might be using Adam.

Billy will snap that Phyllis should hurry up if that’s true. He’ll think Adam’s going to ruin somebody else’s life if Phyllis doesn’t work fast! An exciting week’s coming up in Genoa City, so stay tuned for all the action. We’ll give you updates as other Y&R news emerges. Stick with the CBS soap and don’t forget to check CDL often for the latest Young and the Restless spoilers, updates and news.