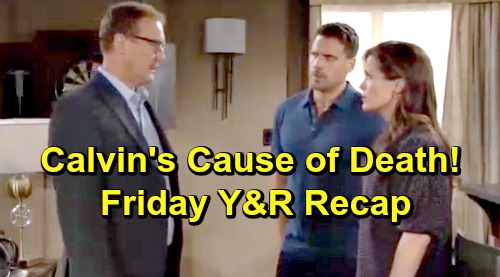 The Young and the Restless (Y&R) spoilers update and recap for Friday, July 12, tease that Nick Newman (Joshua Morrow) will get caught up in nostalgia. As he continues to reconnect with Chelsea Newman (Melissa Claire Egan), Nick will contend that they should bring Connor Newman (Gunner Gadbois) back to Genoa City. He won’t think they should let Adam Newman (Mark Grossman) get in the way of how they want to raise their sons.

Chelsea will remind Nick of the threat Adam poses, so Nick will confess he was just thinking about the past. Y&R spoilers say Chelsea will worry about how far Adam might go to get what he wants. At the police station, Adam will arrive with news regarding Calvin Boudreau’s (John Burke) demise. He’ll point the finger at Chelsea by noting she stands to gain a lot from this death financially.

Adam will add that has a recording, which proves how angry Chelsea was with her husband. Paul will be taken aback by the murder accusations, but Adam will insist Chelsea turned on him. After Billy Abbott (Jason Thompson) gets a text from Chloe Mitchell (Elizabeth Hendrickson) about checking on Kevin Fisher (Greg Rikaart), he’ll head over to the Chancellor mansion. Billy won’t find Kevin, but Esther Valentine (Kate Linder) will there to chat.

The Young and the Restless spoilers say Billy and Esther will fret about the Kevin situation. They won’t know what Chloe might do if Kevin doesn’t head home soon. Esther will vow to get in touch with Billy once Kevin gets back. After Billy notices Delia Abbott’s (Sophie Pollono) doll, he’ll be puzzled. Esther will suggest maybe Kevin did a video chat with Bella Fisher (Cali May Kinder) and showed her.

At the coffeehouse, Phyllis Summers (Michelle Stafford) will needle Christine Williams (Lauralee Bell) about stepping away as DA. Christine will fire back about Phyllis betraying her alliance before the trial. She’ll assume Phyllis will commit other crimes, so she’ll hate that she won’t be the one to toss her behind bars.

At Newman Enterprises, Nikki Newman (Melody Thomas Scott) will confide in Victoria Newman (Amelia Heinle). She’ll talk about Victor Newman (Eric Braeden) becoming forgetful due to the new protocol. Victoria will be concerned about the possibility that things will get worse.

Afterward, Victoria will meet up with Billy at Society. He’ll still be stuck on Delia’s doll, so Victoria will think all the Adam and Kevin drama has stirred up strong emotions. Once Victoria spots Victor blowing up at the bar, she’ll learn he’s bickering with the bartender over tequila. Victor will contend they’ve always had the brand he wants, but the bartender will insist that’s not the case.

When Victor settles down, he’ll fret to Nikki about his condition. Victor won’t want anyone discussing his decline, so Nikki will think it’s best if they stay close to home for the time being. She’ll promise to help Victor through this and hope the side effects are only temporary.

Back with Billy, he’ll show up at the Chancellor mansion again to collect Delia’s doll. Billy will seem a bit haunted as he remembers Delia playing and laughing. He’ll tell Esther he’s fine, but it’s clear that Billy’s facing a battle within.

Other Young and the Restless spoilers say Adam will mention Victoria’s recent warning. He’ll point out Victoria doesn’t think Phyllis can be trusted, but Phyllis will counter that Victoria’s trying to undermine her. Talk will turn to Adam handing over evidence against Chelsea, which Phyllis will be surprised by. She’ll admit she didn’t think Adam was that cold.

Adam will insist Connor’s at the heart of the move. He won’t like the fact that Chelsea’s trying to keep him away from his son. Adam and Phyllis will also have a chat about Christine’s decision not to seek reelection. It turns out Adam would like to “buy” Christine’s replacement and apparently have some help on the inside.

Back at Nick’s house, Paul will report that Calvin’s death was caused by a massive coronary. It was a “widowmaker,” so Paul will put the case to rest. Before he goes, Paul will warn Chelsea that Adam isn’t looking out for her best interests. Once Nick and Chelsea are alone, he’ll reassure her that she doesn’t have to live in fear now.

At Society, Celeste Rosales (Eva LaRue) will suggest that the wedding seems a bit rushed. She’ll think Kyle Abbott (Michael Mealor) and Lola Rosales (Sasha Calle) need to slow their roll, but Kyle won’t be interested in delaying the nuptials. After Mariah Copeland (Camryn Grimes) drags Kyle away, that’ll leave Celeste and Lola to sort out their recent issues.

Celeste will get choked up about Lola not needing her anymore, but Lola will insist she does. After they patch things up, Celeste will misunderstand what that means and plan to move back in with Lola. The Young and the Restless spoilers say Lola will give Kyle updates and suggest that at least sneaking around will be hot.

It sounds like another action-packed episode’s coming up. We’ll keep you posted as other Y&R details emerge. Stay tuned to the CBS soap and don’t forget to check CDL often for the latest Young and the Restless spoilers, updates and news.