BY Heather Hughes on August 27, 2019 | Comments: one comment
Related : Soap Opera, Spoiler, Television, The Young and the Restless 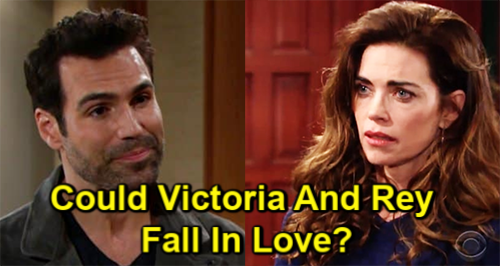 The Young and the Restless (Y&R) spoilers reveal that Billy Abbott’s (Jason Thompson) downward spiral could lead to relationship issues. Victoria Newman (Amelia Heinle) obviously wants to stand by Billy and help him cope, but sometimes things don’t work out like soap characters want. “Villy’s” latest reunion could be headed for big trouble.

After all, Victoria was wary of remarrying Billy. They had a recommitment ceremony, but that’s not quite the same as another marriage. It was an interesting writing choice, so we have to wonder what it means.

It’s possible Y&R writers were just trying to do something unusual, but it’s also possible they knew Victoria and Billy were doomed. They may have opted to skip the messy divorce that would have resulted.

Billy Abbott Is Mentally Unstable And May Face Legal Drama

The Young and the Restless spoilers say Billy has dissociative identity disorder, so he’ll undoubtedly need treatment eventually. Could it take him out of the picture for a while? Will that give Victoria time to lean on another man? It’s a possibility to consider, especially since Chloe Mitchell (Elizabeth Hendrickson) is back in town and that brings the possibility of a “Chilly” reunion at some point.

Of course, Billy might have some charges to beat depending on how this Adam Newman (Mark Grossman) plot shakes out. That shouldn’t be too hard though. Billy is mentally unstable and fellow Adam hater Michael Baldwin (Christian LeBlanc) is the new DA. He could get off the hook, but the initial arrest and legal drama might put Rey Rosales (Jordi Vilasuso) in Victoria’s orbit.

Could Rey and Victoria be a possible match? It might be worth a shot since Rey needs a love interest. Y&R spoilers say Lola Abbott (Sasha Calle) will push Rey to give Sharon Newman (Sharon Case) a pass and work things out. However, Rey may not be keen on doing that. They found closure and got back to a friendly place, but Adam is always going to hold a piece of Sharon’s heart.

Will Billy Abbott Push Victoria Newman Away By His Actions?

Rey will just set himself for more disappointment if he gets back together with Sharon. He may not be down for another round of watching Sharon slip away. As for Victoria, she’ll be a mess thanks to all the Billy chaos that’s brewing. Perhaps Victoria’s vulnerability and Rey’s loneliness could create the perfect storm for romance.

It’d be a shame for Victoria to betray Billy like that, but maybe she wouldn’t even have to. Billy might push Victoria away and feel unworthy after his latest revenge mission. A breakup would be one more reason for Victoria to seek comfort elsewhere, and Rey’s arms might be an intriguing spot. There’s no guarantee Victoria and Rey would have chemistry, but Y&R could give them a chance anyway.

Regardless, The Young and the Restless spoilers say the excitement’s about to rev up. Would you give Victoria and Rey a shot as a couple? Do you think they’d make a good match? We’ll give you updates as other Y&R news comes in. Stay tuned to the CBS soap and don’t forget to check CDL often for the latest Young and the Restless spoilers, updates and news.