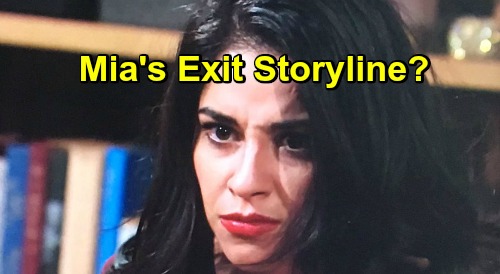 The Young and the Restless (Y&R) spoilers tease that Mia Rosales (Noemi Gonzalez) will find herself in hot water. She’s already sweating bullets since she can’t find her missing earring. That earring fell in the snow near the Abbott pool side, where Lola Rosales (Sasha Calle) was attacked. It’s a distinctive design, so it’ll inevitably lead to big trouble for Mia.

The cops did a thorough search of the grounds and intend to use everything they found to solve this case ASAP. Naturally, Rey Rosales (Jordi Vilasuso) has made it his personal mission to hunt down Lola’s attacker. Little does he know his married to her! The fact that Mia was really targeting Abby Newman (Melissa Ordway) will make this mystery even messier for the GCPD.

Even though Rey can’t be assigned to this case officially, that won’t stop him from following every lead he can find. Of course, Rey obviously isn’t the greatest detective in the world. It takes him a while to get on the right track, but he’ll have extra motivation here. Rey loves Lola dearly, so he’ll make figuring out who did this to her a priority.

Plus, Rey’s living with the monster herself! Now that Sharon Newman (Sharon Case) has turned against Rey, he may stick with his marriage to Mia. Lola’s ordeal is bringing Mia and Rey closer anyway, which will be even more of a blow once Rey learns the truth.

How will Rey uncover this Young and the Restless shocker? Will he stumble across the hidden earring at some point? Could intended victim Abby be the one to crack the case instead? That might be fitting since they put their feud on hold thanks to Lola’s hospitalization. If Abby discovers Mia’s mistaken identity assault, it’d be great way to rev up the rivalry again.

Regardless, this could be the beginning of the end for Mia. Can she truly come back from something like this? Now that huge changes are happening behind the scenes are Y&R, there are bound to be some cast cuts. This seems like the kind of thing that could be Mia’s exit story.

If Mia goes crazy upon exposure and actually attacks Abby like she planned, that’d be even better. Mia might end up behind bars or in Fairview after all this. Either option would work for an exciting path out of Genoa City. The Young and the Restless spoilers say Mia will definitely face major backlash for her actions, so her exit is certainly possible.

It sounds like some bombshells are brewing on the CBS soap. We’ll give you updates as other news comes in. Stay tuned to Y&R and don’t forget to check CDL often for the latest Young and the Restless spoilers, updates, and news.