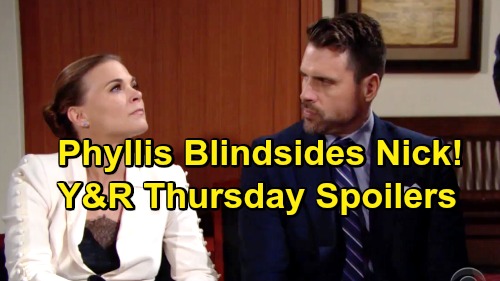 The Young and the Restless (Y&R) spoilers for Thursday, February 21, tease that plans will be underway for a shocking day in court. Thanks to Phyllis Summers’ (Gina Tognoni) info, Christine Williams (Lauralee Bell) has enough to move forward. It looks like Phyllis will go before a judge and testify on Friday, so there’ll be a lot to prepare for.

Phyllis is now Christine’s star witness, but how much will she tell Nick Newman (Joshua Morrow) beforehand? Probably not much since he’ll face a major bombshell on Friday’s new Y&R episode, February 22. Perhaps Phyllis will bend the truth a bit when it comes to the deal she cut.

Even if Phyllis admits she’s to blame for the cops finding the evidence, she may not reveal the whole story. Phyllis intends to sell everyone out completely with her testimony. Will that be a deal-breaker in her relationship? Time will tell, but Phyllis should be sitting on a shocker in Thursday’s Y&R episode. Michael Baldwin (Christian LeBlanc) may end up blindsided once again along with Nick.

Meanwhile, Lola Rosales’ (Sasha Calle) loved ones will await updates on her condition. Kyle Abbott (Michael Mealor) will hope for good news, but there’ll certainly be other hopeful Genoa City residents, too. In addition to Kyle and Lola’s family, Devon Hamilton (Bryton James) and Ana Hamilton (Loren Lott) will root for Lola’s recovery.

Before the call comes in, Devon will offer encouragement to Ana. He’ll point out that she was a huge hit when she filled in for Fenmore “Fen” Baldwin (Zach Tinker) at the showcase. Devon will push Ana to get back in the game and keep singing, but she may remain on the fence. It seems Ana’s got some dark secrets in her past, so those could come back to haunt her.

Later, Devon will hear about Lola’s attack and want to pay her a visit. The Young and the Restless spoilers say Ana will fear this is a catastrophic decision. Devon lost his soul mate in that hospital. What will it be like once he’s back there reliving those horrible memories? Unfortunately, it’ll almost be like losing Hilary Hamilton (Mishael Morgan) all over again.