The Young and the Restless Spoilers: Maria and Ana Clash – Mariah Too Hands-On In Tessa’s Music Career

BY hellodrdavis on May 1, 2019 | Comments: Leave Comments
Related : Soap Opera, Spoiler, Television, The Young and the Restless 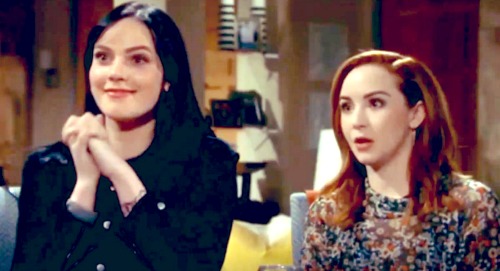 The Young and the Restless spoilers tease that Mariah Copeland (Camryn Grimes) will inadvertently cause some problems for Tessa Porter (Cait Fairbanks). These two have had a rough time during the past few months. Tessa blackmailed Mariah’s mom Sharon Newman (Sharon Case) and the rest of the cover-up crew, and that took some time for them to work through. Mariah nearly left Tessa, but ultimately decided to stay and the ladies successfully worked through their issues.

Now that the JT Hellstrom (Thad Luckinbill) drama is behind them and the blackmail charges against Tessa have been dropped, Mariah and Tessa are free to live their lives in peace. Tessa desperately wants to reignite her music career. Sure, she can make ends meet by working at Society, but what she really wants is to record music.

Mariah recently helped Tessa find her voice again, and she also managed to convince Devon Hamilton (Bryton James) to let Tessa record some music for his label. Of course, since then Neil Winters (Kristoff St. John) passed away, so Tessa’s musical plans had to be put on hold for a while. But soon, she’ll get her chance to show Devon’s label what she’s got.

According to Y&R spoilers, Devon will pair Tessa up with Ana Hamilton (Loren Lott) for some mentoring and grooming. Tessa writes her own music, but it may need some refinement and polishing. There’s a lot that goes into being a successful recording artist – you have to be the whole package. Ana has a keen eye and lots of musical talent herself, so she’ll be the perfect person to work with Tessa.

But it looks like there will soon be a problem that develops between Tessa and Ana. Mariah’s level of involvement in Tessa’s singing career will be a bit much for Ana’s taste. Y&R fans know that Ana has a very strong work ethic and she really digs in and has strong opinions about music and how artists should commit themselves to the process.

According to Y&R spoilers, Mariah will be too hands-on in Tessa’s music career. She’ll have opinions about what Tessa should be doing and singing, and it will be at odds with what Ana advises Tessa to do. Look for some major tension between Mariah and Tessa going forward…with Tessa stuck smack dab in the middle.

It will be interesting to see how Tessa manages the conflict between her mentor and her girlfriend, but she’ll probably have to lay down the law and tell Mariah to butt out at some point. Do you think Tessa will be able to bring herself to tell Mariah to back off? Stay tuned to the CBS soap and don’t forget to check CDL often for the latest Young and the Restless spoilers, updates, and news.