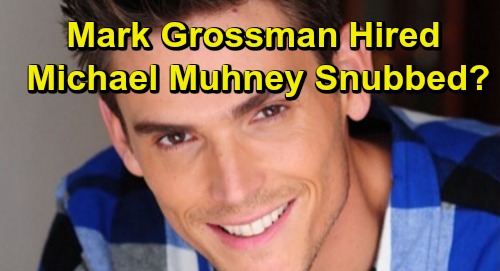 The Young and the Restless spoilers tease that since Mark Grossman has been hired as the new Adam Newman, Michael Muhney fans should follow this actor’s lead. He’s moved forward with life since being removed from the cast in December 2013. Muhney chose to count his blessings ever since, which was and is a wise choice.

It would be fair to place Michael Muhney with the best soap actors in his generation. He’s that good, as was evidenced by his indelible performance as Adam on Y&R from 2009-2014.

Muhney’s soap opera backstory took hold as early 2014 played out. An initial lack of detail about why he’d been let go, at the height of his daytime popularity, wasn’t logical.

Some then chose to engage in stretched speculation about Y&R’s decision. But Muhney hired a private investigator who proved that negative information was disseminated without being sourced. Translation, Muhney had done nothing that made him ineligible for rehire at Y&R. So, a potential come back was possible.

According to the actor’s own recount (leading into his termination), he told Y&R that he might quit, or the show would have to fire him. His feelings in this regard were fully connected to the pressure he’d placed upon himself. Stardom does create double-edged swords.

It was factual to report that Y&R chose to interview Muhney in the summer of 2014. That act affirmed that he was eligible to rejoin the cast. The corporations connected to daytime’s iconic steamer would never have allowed Muhney to be interviewed if there was any evidence of anything untoward.

So, why hasn’t Muhney been rehired as Adam Newman now? Well, it’s nearly a half-decade later and different people are in charge. As was true of misguided speculation about Muhney in the past, it would be unenlightened to look down at Y&R’s current decision without having any direct knowledge.

Mark Grossman is the choice as Adam and deserves a chance to succeed. All fair-minded Y&R fans will give him that, just as they have all other actors who’ve ever worked on the show, including Justin Hartley who scored an A for his portrayal as the then-recast character (2014-2016). Nevertheless, some Michael Muhney fans are furious at the perceived snub as can been see by scanning any social media devoted to Y&R.

All who have followed Muhney’s social media feeds know that he’s a committed family man who also values his friends, including the more than one-hundred thousand digital connections he’s earned. Yes, he wanted to play Adam again in 2014 and stated that he was open to being considered for the role after Hartley left the cast. Whether he was involved in the latest casting call isn’t known.

Muhney demonstrated true contrition for being too assertive during the later part of his Y&R run, thereby somewhat forcing former executive producer Jill Farren Phelps’ hand. He’s also evidenced sincere goodwill toward his cast mates and behind-the-scenes players ever since. Muhney’s gratitude toward all his fans remains heartwarming.

Since the actor isn’t dwelling on his own past, neither should anyone who values this actor’s work. Muhney has moved forward, which represents the type of maturity human beings strive for whenever challenging times are endured. One can easily choose to follow that positive mindset, as holding grudges, especially on other’s behalf’s, isn’t healthy and surely doesn’t represent entertainment.

Best wishes are honestly offered to Muhney, Grossman, all who are connected to Y&R, and to its loyal fans. CDL is a leading source for everything linked to The Young and the Restless. Check back regularly for Y&R spoilers and news!