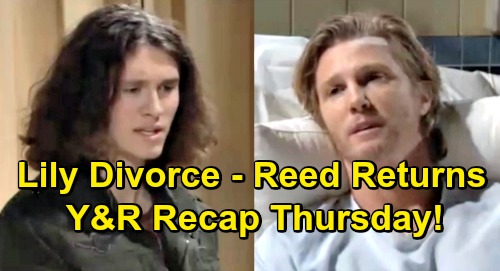 The Young and the Restless (Y&R) spoilers update and recap for Thursday, March 28, tease that Victoria Newman (Amelia Heinle) will be tormented by nightmares. She’ll have a dream about J.T. Hellstrom (Thad Luckinbill), but Reed Hellstrom (Tristan Lake Leabu) will be there to reassure her. Reed won’t be happy that Victoria hid so much of the case from him, but she’ll insist she was just trying to protect him.

Now that J.T.’s tumor has been removed, Victoria will hope he can be the father Reed needs him to be. Later, Reed will pay J.T. a visit in the hospital. Y&R spoilers say J.T. will offer an apology for all the sorrow he caused. Reed will think J.T. was a good dad before his medical issues, so J.T. will want to get back to where they were.

Afterward, a couple of police officers will show up to make an arrest. Reed will be upset since J.T.’s actions weren’t his fault, but J.T. will feel like he must face consequences. Once J.T. exits, Reed will take his anger out on Victoria. She’ll end up having a meltdown at home and crumbling into a pile on the floor.

At Dark Horse, Abby Newman (Melissa Ordway) will find a surprise waiting for her. The Young and the Restless spoilers say she’ll follow a trail of rose petals until she gets to a room full of flowers. Arturo Rosales (Jason Canela) will be holding a single rose as he pours his heart out. He’ll beg for another chance, but Abby will maintain that they’re over.

Abby will rant about how Arturo will probably land back in Mia Rosales’ (Noemi Gonzalez) bed soon. She’ll also reveal that she had a little chat with Nick Newman (Joshua Morrow). Arturo will learn he’s been fired, so the well-deserved blows just keep coming.

Meanwhile, Cane Ashby (Daniel Goddard) will get some heartbreaking news. He’ll receive divorce papers from Lily Ashby (Christel Khalil), so he’ll have to tell the twins about her choice. Cane will confess that he caused more pain for Lily, but he’ll refuse to give up on their family.

After Mattie Ashby (Lexie Stevenson) and Charlie Ashby (Noah Alexander Gerry) take off, Cane will get a visit from Michael Baldwin (Christian LeBlanc). He’ll convince Michael to speak with Lily and hopefully convince her to see her husband. Once Michael leaves, Cane will tear up the divorce papers. It’s clear that he’s serious about fighting for the “Lane” fam.

At Crimson Lights, Michael will pass along better news for Tessa Porter (Cait Fairbanks). Mariah Copeland (Camryn Grimes) will pester Michael about representing Tessa on the blackmail charges, but Michael will admit they’re being dropped. After calling for confirmation, Tessa will hug Mariah and they’ll celebrate the end of her nightmare with some cupcakes.

The Young and the Restless spoilers say Tessa will go down the list of her mistakes and hope to be a better person from now on. Talk will turn to her music, but she’ll think she blew her shot. However, Mariah will push Tessa to keep at it. She’ll think Tessa should start writing songs again, so maybe Y&R is inching Tessa back toward her passion.

Afterward, Abby will interrupt a slow dance between Mariah and Tessa. She’ll want to talk about a GC Buzz report on the new restaurant. Abby will contend that despite her recent health setback, Lola Rosales (Sasha Calle) will be ready to take on chef duties. She’ll plan to do a media blitz and let all of Genoa City know she means business.

Y&R fans won’t want to miss Thursday’s exciting scenes. We’ll give you updates as other details emerge. Stay tuned to the CBS soap and don’t forget to check CDL often for the latest Young and the Restless spoilers, updates and news.