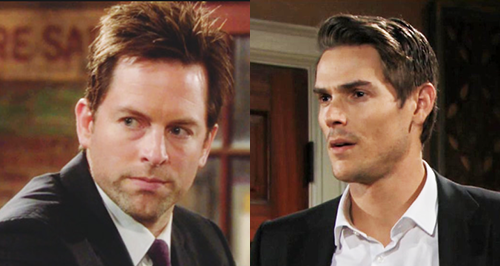 Chris Engen’s run was brief, lasting from 2008-2009. Y&R had not developed the character into what he later became during that time period. While Engen delivered sound performances, it’s not fair to compare the Adam he played to the one that Muhney projected.

Muhney assumed the role in 2009 and was last seen as Adam in January 2014. Without question this actor’s efforts stand as the most acclaimed. The storylines he was tasked with working and the actor’s dynamic range drove a secondary character to prominence, where he towers again.

Justin Hartley debuted in the fall of 2014. It was obvious that TPTB wanted his edition to be softer and more introspective than Muhney’s version.

Soap opera decision-makers and their writing staffs often present a different angle for sharpened characters through a recast (the specifics of which, in this instance, aren’t the point of this feature). Doing so allows a fresh take and different types of storylines to be written. Such was the case through the time when this strong actor moved on in 2016.

Now, by aging Adam backwards, Y&R creatively restarted the clock on 2109’s Adam. At the same time initial scripts have Grossman’s alter ego flailing at various foes. That is far more like what Muhney’s Adam did, than how Hartley’s Adam lived.

Grossman’s Las Vegas, Nevada, stop-off, which has now been intriguingly connected to Chance Chancellor (John Driscoll), provides the type of mysterious backstory that can be mined for awhile. That dirt won’t sift easy.

Adam’s tease of Sharon Newman (Sharon Case), along with her surprising interest, positions the comeback of Chelsea Lawson (Melissa Claire Egan) as extra messy. But, those loves would be topped if Y&R ever decides that Phadam become more than the business partners they already are.

Imagine Phyllis Summers (as again played by Michelle Stafford, who herself evoked far darker themes than Gina Tognoni’s lighter version was written into) and Adam together?

Writing Adam as a tormented character who isn’t seeking redemption makes sense, as that is when he was, arguably, the most appealing. CDL is a leading source for everything linked to The Young and the Restless. Check back regularly for Y&R spoilers and news!