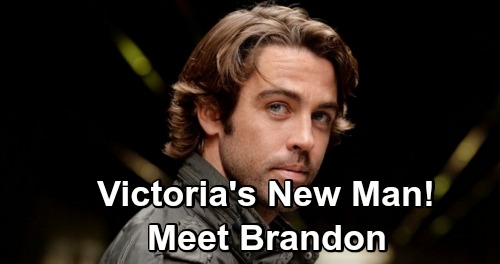 The Young and the Restless spoilers tease that Victoria Newman (Amelia Heinle) will soon be heading in a new direction with a new man. She’s had a lot of trauma and devastation in her life recently, after being sentenced to 10 years in prison for JT Hellstrom’s (Thad Luckinbill) murder, then coming face-to-face with him in the Abbott cabin, where she nearly lost her life. And this was on top of months of JT-related stress leading up to the recent events.

You’d think that since the ordeal is behind Victoria, that maybe she’d get some moments of peace, but that apparently isn’t in the cards. Victoria’s deeply upset that Reed Hellstrom (Tristan Lake Leabu) has rebuffed her in the wake of JT’s reappearance, and she’s got Billy Abbott (Jason Thompson) doting on her a bit too much. Victoria’s feeling intense pressure from Billy to get back together with him, and she just needs an escape.

According to Young and the Restless spoilers, an escape is exactly what Victoria will get. She’ll decide to get away from Genoa City for a while, so she’ll pack her bags and head out of town to a swanky hotel, where she checks in under an assumed name. Victoria clearly doesn’t want to be found and just wants to be alone and away from any of her past and present difficulties. In the pic below you can see Brandon in a selfie with Victoria in Vegas? 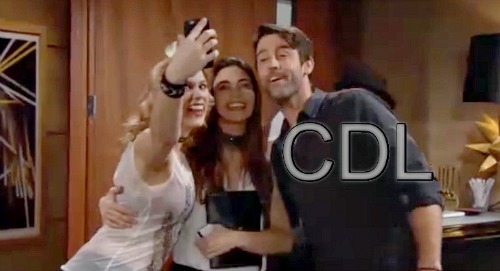 But while away, Victoria will get quite the surprise. While enjoying her hotel room of solitude, someone will appear at her door, and he’ll be quite attractive as well as a bit inebriated. He’ll be looking for someone named “Lizzie” and Victoria will try to send him away, saying that he has the wrong room. He’ll introduce himself as “Brandon” (Mitch Eakins) and explain that he’s in the band playing at the hotel lounge. Brandon’s first Y&R airdate is April 3.

According to The Young and the Restless spoilers, although Victoria will at first be annoyed by Brandon, she’ll soon become intrigued when she sees a flyer with his photo on it. And he may just help Victoria to let loose a little and enjoy herself for the first time in a long time. Exactly how the two will connect, and how close they get, remains to be seen, but it certainly looks like TPTB are setting up a Brandon-Victoria pairing.

And there may be more to Brandon than meets the eye. According to Y&R spoilers, he may hold the key to a new mystery in Victoria’s life. So, it sounds like Brandon may eventually follow Victoria back to Genoa City, and if he does, then Billy surely won’t be happy about it. We could be looking at both Brandon and Billy vying for Victoria’s heart!

The actor who will be portraying Brandon is Mitch Eakins, who has appeared in various movies and TV series, including SEAL Team, The Affair, and Wave Goodbye. He also appeared on Days of Our Lives as Pete Clarke from 2013-2014.

Are you looking forward to seeing Victoria with a new Y&R love interest? Stay tuned to the CBS soap and don’t forget to check CDL often for the latest Young and the Restless spoilers, updates, and news.