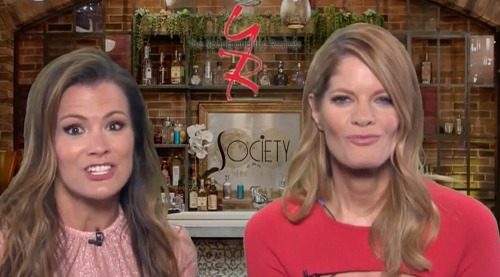 The Young and the Restless (Y&R) spoilers reveal that two CBS soap stars recently served up some story hints and reflected on stories gone by. In an interview with Good Day Sacramento, Melissa Claire Egan (Chelsea Newman) and Michelle Stafford (Michelle Stafford) sat down for a fun interview. They obviously couldn’t divulge all the details about what’s ahead, but they did have a few teasers to pass along.

Before we get to those, let’s talk about another great portion of the interview. They were asked about crazy scenes that they remembered the most, so Egan urged Stafford to share her octopus memory. It was a wild plot point that Stafford will never forget.

“I think like back in the day, Phyllis put an octopus in Cricket and Paul’s bed because she wanted to ruin their honeymoon,” Stafford said. Egan joked, “As one does! I’ve done that in my real life like four times.” Stafford added that it was a real octopus and happened to smell quite fishy, so it’s certainly a scene that haunts her.

Despite the craziness of the storylines, Egan and Stafford agreed that sometimes the real world can be just as nuts. Stafford suggested there’s some “wild stuff out there,” and Egan echoed that sometimes the real news is soapier than Y&R! However, she admitted there are times when she wonders how they’re going to pull off certain stories. They just have to trust the writers and hope for the best.

As for what’s next in Genoa City, The Young and the Restless spoilers say Chelsea and Phyllis will be on a backstabbing merry-go-round. They’ll keep retaliating after undermining each other, but they’ll ultimately go into business together on the Grand Phoenix. Speaking of the Grand Phoenix, the opening is coming up – and it’s sure to bring some chaotic, hilarious moments.

Egan teased, “And then there’s this huge party we throw for the opening…some crazy stuff happens there. You have to watch. We can’t really say. It’s never really been done in daytime I don’t think, but what happens at the party is like bananas.” “It’s really funny,” Stafford insisted.

Of course, we have to wonder what on earth hasn’t been done in daytime before. Stafford herself talked about Phyllis and that octopus incident, so that tells you a lot! Soaps have covered a little bit of everything, so it’ll be interesting to see what kind of party explosion’s in store.

Theo Vanderway (Tyler Johnson) suggested that sometimes scandals make the best openings, so there’ll undoubtedly be some of those going on. Summer Newman (Hunter King) should be on hand for this event. We know Mariah Copeland (Camryn Grimes) and Tessa Porter (Cait Fairbanks) will get in the mix as well.

Abby Newman (Melissa Ordway) will naturally be there, and her portrayer backed up the idea that hilarity will ensue. In a recent Instagram story, Ordway praised the upcoming episodes as “so funny” and “so different.” She’s excited for fans to see how it all plays out.