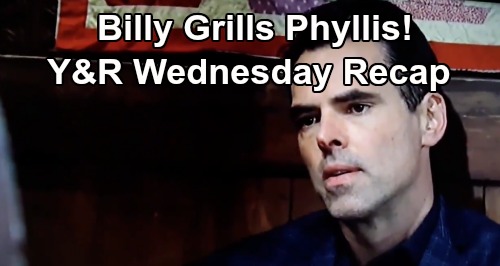 The Young and the Restless (Y&R) spoilers recap for Wednesday, August 21, tease that Victoria Newman’s (Amelia Heinle) concerns will grow. Billy Abbott (Jason Thompson) will forget to pick up Johnny Abbott (Ryan and Holden Hare), so he’ll confess he’s still not sleeping well and has been tense. Victoria will opt to pick up Johnny instead, but Billy will still have a merger meeting to attend.

At Society, Billy will join Jack Abbott (Peter Bergman), Ashley Abbott (Eileen Davidson), Abby Newman (Melissa Ordway) and Summer Newman (Hunter King). Summer will get caught up in Theo Vanderway’s (Tyler Johnson) text, which will let her know she’s busy right now. Abby and Summer will eventually leave the others to debate this merger, which Billy will have doubts about.

Billy will feel like Ashley’s just going to turn her back on them again. He’ll lash out, but Ashley will feel like Billy made some mistakes of his own. Jack will hint that maybe this has something to do with what they discussed recently. He’ll drop the hint and hope Billy sees that all the Delia Abbott (Sophie Pollono) torment is getting to him. Billy will gripe about not being able to trust Jack before he takes off.

Afterward, Jack will reach out to Victoria and share his worries. Victoria will fret over the situation and contend that Billy may not even want to get better. His nightmares seem to make him feel closer to Delia, so it’ll be tough for him to let go.

Back with Billy, he’ll summon Phyllis to the coffeehouse for a chat. They’ll take jabs over the past briefly before Phyllis asks what Billy wants. He’ll be eager to find out what Adam Newman’s (Mark Grossman) up to. The Young and the Restless spoilers say Phyllis will talk about her latest drama with Adam. However, she won’t think it’s fair that they’re the only ones around town who get judged.

Billy will bring up Chelsea Newman’s (Melissa Claire Egan) recent windfall, so Phyllis should appreciate that nugget. Y&R fans can also expect Billy to rage over Adam never paying the price. He’ll make it clear Phyllis should be careful which side she chooses. Taking Adam’s side could mean becoming collateral damage!

At the park, Sharon Newman (Sharon Case) will wonder why Adam would suddenly propose. She already told Adam where she stands, but he’ll maintain that they belong together. Adam will assure Sharon this isn’t about Chelsea or anything other than their strong connection. He’ll believe they need each other, but Sharon will refuse to let Adam pull her back into chaos.

Even so, Sharon will confess that she cares about Adam. He’ll feel like he could let all the other stuff go if he just had Sharon back. Sharon will view that as pretty manipulative, but Adam will push her to mull over the proposal and get back to him. Later, Adam will be pleased when Sharon shows up at the penthouse.

Other Young and the Restless spoilers say Devon Hamilton (Bryton James) will offer Theo a full-time job at LP. Theo will contend that he’d be a better fit as the head of Power Communications. Devon will be irritated over the suggestion, but he’ll let Mariah Copeland (Camryn Grimes) decide if she wants to let Theo work under her.

On the roof deck, Summer will vent to Phyllis about Theo’s message. She’ll explain that Zoe Hardisty (Anna Grace Barlow) used to party with Theo and Kyle Abbott (Michael Mealor) before getting some advice. Phyllis will suggest that Summer should set the terms if she’s going to see Theo again.

Nearby, Jack and Celeste Rosales (Eva LaRue) will chat about old relationship issues. When Celeste admits she’ll be heading home soon, Jack will be disappointed. Back with Theo, he’ll track down Mariah to grill her about a client that walked away. Mariah will insist they weren’t a good match. She’ll be annoyed when Theo notes that he talked to Devon about working with her.

After Mariah agrees to hear Theo out, he’ll insist his expertise would be valuable at Power Communications. He’ll think he could take the company to a whole new level, but Mariah will offer a warning in return. She’ll point out that she could swipe Theo’s clients and make his agency obsolete.

Summer will waltz over soon after and speak with Theo about his decision to bring Zoe as his plus one. He’ll think it feels good to blow things up. Summer will share a kiss with Theo while Phyllis tells Adam she’s found a way to secure her hotel stake money. Phyllis will contend that she can shove Abby out of the picture soon enough. She’ll also call Chelsea and leave a voicemail to get in touch.

It turns out Victor Newman (Eric Braeden) will eavesdrop on Phyllis’ plans, so he’ll divulge them to Abby. She won’t seem worried; she’ll actually look forward to shutting Phyllis down at every turn. Victor will contend that Phyllis is a toxic woman, so Abby will have to give her dad’s guidance some thought.