The Young and the Restless Spoilers: Tuesday, August 20 Review – Zoe Poised To Cause Trouble For Kola – Adam Proposes To Sharon

BY hellodrdavis on August 20, 2019 | Comments: one comment
Related : Soap Opera, Spoiler, Television, The Young and the Restless 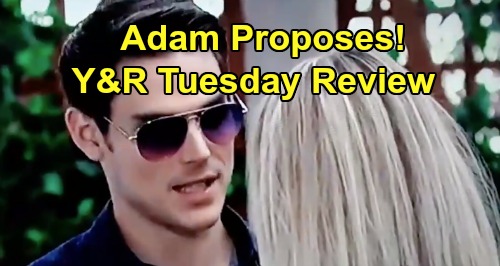 The Young and the Restless spoilers review for Tuesday, August 20, tease that Sharon Newman (Sharon Case) will have an interesting day. Things will start out oddly enough when she encounters Adrian Rosales (Jay Montalvo) at Crimson Lights. The elder Rosales will flirt with her, causing an uproar when Rey Rosales (Jordi Vilasuso) observes what’s going on.

After all of that drama, Sharon will get a call from Adam Newman (Mark Grossman), and despite her previous assertion that she’s done with Adam, she’ll meet him later. He’ll surprise her with a sudden and out-of-the-blue proposal of marriage, and she’ll be stunned. Of course, Adam most likely has something up his sleeve here.

This is probably a calculated move on Adam’s part designed to help him in the custody case. Since Sharon has a relationship with Christian Newman (Alex Wilson), Adam probably figures that marching her would help him score custody out from under Nick Newman (Joshua Morrow). Hopefully, Sharon will see right through it.

Meanwhile, on the new episode of Y&R on Tuesday, August 20, Summer Newman (Hunter King) will unexpectedly meet Zoe Hardisty (Anna Grace Barlow). Zoe will show up at the rooftop bar and introduce herself to Summer as one of her social media followers. As they talk, Zoe will relay that Theo Vanderway (Tyler Johnson) told her that Kyle Abbott (Michael Mealor) had been worried about her, and that’s why he brought her to town.

Speaking of Zoe, she’ll come up briefly as Kyle and Lola Abbott (Sasha Calle) are honeymooning. The newlyweds will be enjoying their time together at their honeymoon destination, and they’ll recount some of the events of their wedding, including Adrian showing up. Lola will wonder if perhaps Theo had brought a date to the reception to try to make Summer jealous, but they’ll get off that topic quickly.

Of course, Kyle’s not going to be able to hide the truth about Zoe from Lola forever. Since it looks like Zoe’s sticking around Genoa City, at least for a while, the two will probably eventually run into each other. Kyle really needs to get out in front of the secret and tell Lola the truth before she finds out from someone else…which is bound to happen if Theo has his way.