BY Heather Hughes on August 20, 2019 | Comments: one comment
Related : Soap Opera, Spoiler, Television, The Young and the Restless 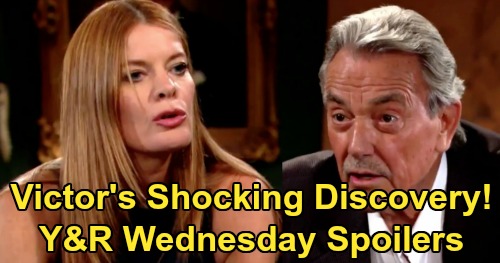 The Young and the Restless (Y&R) spoilers for Wednesday, August 21, tease that Phyllis Summers (Michelle Stafford) will do some wheeling and dealing. She needs money for a stake in the Grand Phoenix, so someone will have to help her out. That someone will be Chelsea Newman (Melissa Claire Egan), but it’ll take some convincing.

Phyllis isn’t the kind of gal most GC residents want to do business with, so Chelsea should be wary at first. Nevertheless, Chelsea may think this is the perfect opportunity to wash the cash Daryl Tulane (Gordon Thomson) handed over. She’ll take some time to mull over Phyllis’ offer and there’ll be some backstabbing in between, but it sounds like this deal will come together later this week.

In the meantime, Phyllis’ big mouth will get her in trouble. She’ll gloat about her plan to cut Abby Newman (Melissa Ordway) out entirely and secure the Grand Phoenix for herself, so an eavesdropper will fume. That eavesdropper will be Abby’s own father! Daddy dearest Victor Newman (Eric Braeden) will quickly take charge of the situation, so a Victor-Phyllis battle is brewing.

The Young and the Restless spoilers say these foes won’t be scared of each other. Victor will warn Abby about Phyllis’ intentions, which will put the whole deal in jeopardy. It seems Phyllis and Abby may work things out eventually, but Victor will put Phyllis on notice. Of course, Phyllis will give as good as she gets. She’ll make it clear that Victor shouldn’t get in her way, but he’ll hold his own in their latest war.

Over with Theo Vanderway (Tyler Johnson), he’ll stir the pot again on Wednesday. Theo just can’t stand it if he’s not infuriating someone. Since Kyle Abbott (Michael Mealor) and Lola Abbott (Sasha Calle) are on their honeymoon, Theo will need somebody else to sabotage. He’ll make Mariah Copeland (Camryn Grimes) his new target, but his plan won’t go as expected.

Theo will track down Devon Hamilton (Bryton James) to pitch himself as the new head of Power Communications. However, Devon hand-picked Mariah to do this job. Theo may think he’s a pro at managing social media influencers and securing hype, but that’s not all Devon’s looking for.

Devon needs someone who genuinely cares about each artist’s vision and can craft a successful image around it. Mariah is doing some fantastic work in her new position, so Devon won’t see any reason to toss her aside – especially since she’s a close friend of his. In fact, it appears Devon may scold Theo for his futile attempt to undermine Mariah.

The Young and the Restless spoilers say Theo will wind up asking Mariah to collaborate instead, but will she actually get on board? It’s possible Theo will come up with an offer that’s too good to refuse, but this is definitely going to be a hard sell. Mariah already suggested New York must miss Theo, so she’d much rather see him scoot on back to where he came from.

Finally, Y&R spoilers say Billy Abbott (Jason Thompson) will have a serious outburst. He’ll be pushed to his limit during a family meeting, so he’ll explode at Ashley Abbott (Eileen Davidson) over his lack of trust. Billy will think Ashley’s just going to betray then again soon enough. When Jack Abbott (Peter Bergman) defends Ashley, he’ll get chewed out, too.

Although Billy has excellent reasons to be concerned, this extreme reaction is probably just his Delia Abbott (Sophie Pollono) torment getting to him. Another exciting episode’s coming up! We’ll give you updates as other Y&R news emerges. Stay tuned to the CBS soap and don’t forget to check CDL often for the latest Young and the Restless spoilers, updates and news.