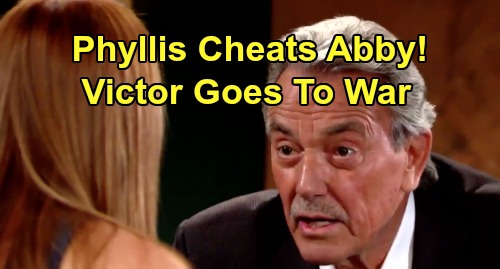 The Young and the Restless spoilers tease that Phyllis Summers (Michelle Stafford) will soon find herself in a tricky position. She’s been given just a few days by Abby Newman (Melissa Ordway) to come up with some major cash if she wants a stake in The Grand Phoenix hotel. It’s the only way that Abby will let Phyllis anywhere near the hotel to put her plans for Genoa City’s hottest lounge into action, and that puts Phyllis in a bind because she’s short on cash and hasn’t had any luck getting investors or loans for the money.

But as Y&R viewers know, there’s someone in Genoa City who just came into several million dollars that she needs to quietly launder…and that’s Chelsea Lawson (Melissa Claire Egan). Chelsea was given some money from some of her late husband Calvin Boudreau’s (John Burke) shady dealings, and the money needs to be “cleaned” through some respectable business deal.

Well, we can certainly see where this is going to go. According to Y&R spoilers, Chelsea will soon be striking a deal, so it looks like she and Phyllis may well go into business together on the hotel. But how will this arrangement come about? Will Chelsea merely be a silent partner, or will she want a say in how things at The Grand Phoenix are run on a day-to-day basis?

Well, it sounds like she may want to be an active partner in the deal. And from the sound of some other Y&R spoilers, Abby could wind up being undercut and left out of the action. Phyllis was never really thrilled about doing business with Abby in the first place; she just put up with Abby and made nice so that she’d have someone to go into business with. So, Phyllis may see an opportunity to use Chelsea’s funds to purchase The Grand Phoenix at Adam Newman’s (Mark Grossman) full asking price.

If that happens, then Abby would be totally cut out of the deal. And according to Y&R spoilers, Victor Newman (Eric Braeden) is going to be suddenly taking an interest in Abby’s business dealings and looking out for her. Might he get wind of Phyllis’ plan to cut Abby out of The Grand Phoenix deal and decide to do battle with Phyllis herself? It sure looks that way, and Phyllis had better watch out, especially if Victor finds out that that Chelsea is planning on laundering money through the deal!

Of course, whether Chelsea discloses to Phyllis that her sum of cash is dirty remains to be seen. Phyllis could be totally in the dark about the whole thing and could be surprised if Victor finds out about it and exposes the truth to bust their deal. At any rate, it will be interesting to see who finally gets ownership of The Grand Phoenix – will it be Phyllis and Chloe, or will their deal get destroyed by Victor, with Abby swooping in and buying the hotel out from under them?

Who do you think will end up owning The Grand Phoenix? Stay tuned to the CBS soap and don’t forget to check CDL often for the latest Young and the Restless spoilers, updates, and news.