The Young and the Restless Spoilers: Melissa Claire Egan Returns As Chelsea Newman 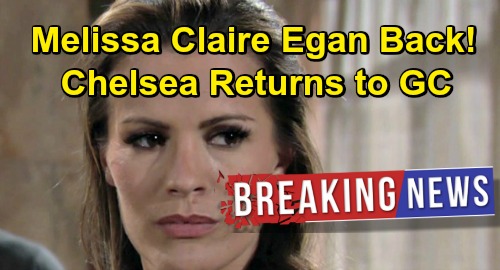 The Young and the Restless (Y&R) spoilers has some fantastic breaking news to pass on about an exciting return. Entertainment Weekly is reporting that Melissa Claire Egan is returning to Y&R to reprise the role of Chelsea Newman. Chelsea was last seen on screen in February 2018 when she abruptly left Genoa City to avoid jail time.

At the time Melissa left Y&R, she told her followers on Twitter that she was leaving but that “this isn’t goodbye…just goodbye for now.” As it turns out she was right, and Melissa took to Twitter once again to announce her return. “Told ya it was just ‘goodbye for now!!!’ This is gonna be gooooooood. Watch #YR!”

Melissa’s followers have been replying like crazy to her Tweet, with lots of congratulations and happy emojis being expressed. One fan wrote: “Welcome back, lady…can’t wait!” and another said: “Yay!!!! Good things to come!” In addition, Jordi Vilasuso, who portrays Rey Rosales on Y&R, replied with “Can’t wait to see you!”

Entertainment Weekly reports that Melissa will begin taping episodes in May, so fans can expect to see her on canvas in early summer. The young and the Restless buzz is that Adam will be gunning for those who made his wife suffer!

Of course, Y&R viewers know that the character of Adam Newman will be returning in May, with Mark Grossman taking over the role. So viewers will have a little time to get used to Mark in the role before Melissa re-joins the cast as Chelsea. Stay tuned to the CBS soap and don’t forget to check CDL often for the latest Young and the Restless spoilers, updates, and news.