BY Heather Hughes on May 11, 2019 | Comments: 3 comments
Related : Soap Opera, Spoiler, Television, The Young and the Restless 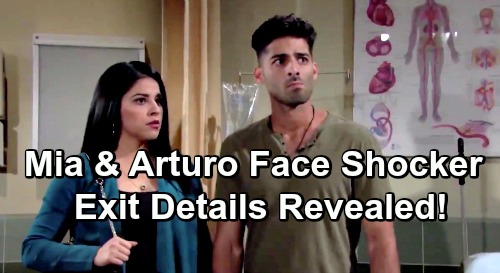 The Young and the Restless (Y&R) spoilers tease that Mia Rosales (Noemi Gonzalez) has some good news headed her way. Despite her recent baby crisis, Mia and her baby will be just fine. Her doctor will eventually clear her for release, but Rey Rosales (Jordi Vilasuso) will insist they’re not done yet. Mia still needs to get a paternity test, and there’s no time like the present.

Arturo Rosales (Jason Canela) will also be eager to learn whether this baby is his or not. General Hospital spoilers say Mia will indeed get that paternity test, but it’ll take a while for the results to be processed. That’ll give Mia a chance to worry about her fate. After Paul Williams (Doug Davidson) confronted Mia, she blurted out a confession and could face serious consequences.

Rey has obviously had enough of Mia and her antics, but he’ll speak up for the baby’s sake. Whether it’s his kid or not, Rey will want to protect him or her as part of the Rosales clan. Family has always been a huge deal for Rey, which means he’ll fight for Mia’s freedom. Rey won’t want this child born behind bars, so push Paul to let this go.

The Young and the Restless spoilers say Rey will make a passionate speech that truly moves Paul. These two have certainly faced some issues and tension, but Paul will sense that Rey’s speaking from his heart. Rey will plead for the charges to be dropped, especially since Lola Rosales (Sasha Calle) doesn’t want Mia punished. Y&R fans can expect Paul to grant Rey’s request, so there’ll be no jail time for Mia.

Afterward, Mia will express her gratitude to Rey. She’ll also apologize along with Arturo, who’ll be deeply sorry for hurting his brother. Mia and Arturo will hate that their repeated betrayals caused so much pain, so they’ll express deep remorse to Rey and hope he can forgive them. The Young and the Restless spoilers say the Rosales fam will start to heal thanks to all these warm moments.

It sounds like the results will prove Arturo is the “baby daddy,” but Y&R has a couple choices here. They could take the touchy-feely route they seem to be taking and make everything legit. Arturo and Mia could leave for Miami together as they await their baby’s arrival.

However, it’s also possible the results will be rigged, and Y&R viewers could be let in on it. That’d still create a little drama and set up a secret that might be revealed down the road. Either way, it looks like Mia and Arturo will be leaving on good terms with Rey and Lola.