The Young and the Restless Spoilers: Week of May 13 Preview – Adam Threatens Nick and Victoria – Sharon’s Amazing Discovery 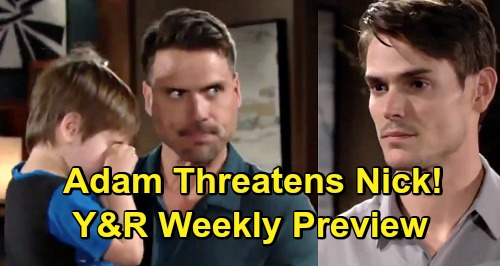 The Young and the Restless (Y&R) spoilers preview and promo videos for the week of May 13-17 tease that Adam Newman (Mark Grossman) will bring some Newman family mayhem. Victoria Newman (Amelia Heinle) will soon find out that Adam survived, which will leave her somewhat torn. She’ll be relieved to know her brother isn’t dead, but she’ll also know big trouble is coming to town.

Victoria will tell Nikki Newman (Melody Thomas Scott) that they have to prepare for the storm that’s headed their way. She may be especially concerned about the inevitable shakeups at Newman Enterprises. Victoria will indeed fight Adam for control of the company down the road, so she’s wise to be wary.

Speaking of being wary, Y&R spoilers say Billy Abbott (Jason Thompson) will be apprehensive as well. He’ll feel like there’s a reason Adam surfaced now. Billy will be convinced that Adam has an agenda and wanted to be found by Victor. He’ll make it clear that when it comes to Adam, trust is never possible.

Other Young and the Restless spoilers say Sharon Newman (Sharon Case) will remain worried about Adam. She sees his softer side and not the villain everyone’s making him out to be right now. Adam certainly had some darkness in him during his previous stints, but GC residents are laying it on a little thick if you ask us. You’d think Adam was a deranged serial killer based on how everybody’s acting.

Nevertheless, it looks like Adam will indeed have some secrets and perhaps a few tricks up his sleeve. Sharon will find Adam with a huge bag of cash and wonder what he’s doing with it. Adam might contend that it’s from all his poker winnings. He wouldn’t just ditch everything he won, so it makes sense that he’d have substantial cash flow.

Of course, Adam may have something nefarious planned for that money. Time will tell, but Adam will likely soothe Sharon’s fears for now.

As for Nick Newman (Joshua Morrow), he’ll be most concerned about keeping custody of Christian Newman (Jude and Ozzy McGuigen). Nick will contend that if his brother has come back to Genoa City to take Christian, Adam will have to go through him first!

The Young and the Restless spoilers state that Victor will be pleased to have his favorite son home, but Adam won’t know what Victor really expects from him. There’ll continue to be tension, but Victor will work hard to win Adam over.