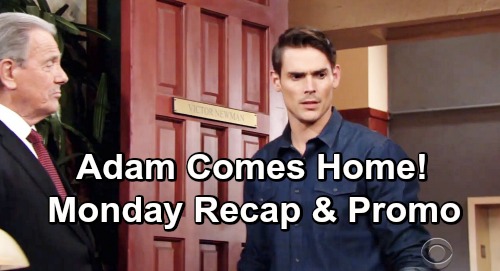 The Young and the Restless (Y&R) spoilers for Monday, May 13, tease that Sharon Newman (Sharon Case) will wonder if seeing her face again might’ve triggered something for Adam Newman (Mark Grossman). Adam will admit that he thought it might, but he won’t be having any luck so far. He’ll bring up how his own father, Victor Newman (Eric Braeden), is like a stranger.

Adam will insist he just doesn’t feel anything toward Victor. Since he hasn’t had any success getting his memories back, Adam will think he should accept the sign. Maybe he’s not supposed to recall his past. Sharon will bring up the photo of Christian Newman (Jude and Ozzy McGuigen) that Adam saved, but he won’t think it’s all that significant.

The Young and the Restless spoilers say Sharon will believe Adam’s still in there. She’ll feel like there has to be part of him that remembers who he is. Adam will gripe about Victor’s pressure and argue that he’d rather put the past behind him. He’ll want Sharon to make Victor back off, but Sharon won’t think anybody can do that.

A frustrated Adam will eventually declare that this has been a waste of Sharon’s time. However, Sharon will take Adam’s hand and promise that’s not true. He could never waste her time or anyone else’s. Adam will mention what he’s read about himself, and he won’t like it. Sharon will suggest that Adam doesn’t know the whole story, but he won’t want to know more than he already does.

Y&R spoilers say Adam will tell Sharon how he became “Spider.” He’ll talk about waking up on a train and being homeless for a bit. Adam eventually started playing poker and met Riza Thompson (Tina Casciani). Next, it’ll be Adam’s turn to grill Sharon. He won’t get why she’s so eager to help him, so Sharon will tell Adam that he saved her life and brought her out of a dark place.

When Sharon pushes Adam to come home to Genoa City, he’ll agree to give it some thought. Adam will smile after Sharon’s gone. He’ll eventually pack up his stuff and prepare to join Sharon’s flight back to GC with Victor. Meanwhile, Billy Abbott (Jason Thompson) and Victoria Newman (Amelia Heinle) will be floored by the big news. Like Nick, Billy will immediately be skeptical of Adam’s amnesia claims.

Nikki Newman (Melody Thomas Scott) will insist that Victor handled Adam’s legal issues, but Nick and Billy will still think Adam’s playing some game. Later, Nick will reflect on a discussion he had with Sharon. He’ll clearly be worried about Sharon potentially getting back together with Adam.

At Society, Billy will keep grumbling about Adam, but Victoria will offer reassurance. She won’t think they have to include Adam in their lives, and Billy won’t be expected to forget Adam’s role in Delia’s (Sophie Pollono) death. The Young and the Restless spoilers say Billy will still be concerned, but Victoria will promise they’ve got this.

At the Abbott mansion, Lola Rosales (Sasha Calle) will fill Kyle Abbott (Michael Mealor) in on Mia Rosales’ (Noemi Gonzalez) condition. She’s no longer cramping and is getting an ultrasound. Kyle and Lola will connect over having messed up families. Since Lola will want to ditch her bad pool memories, they’ll don their swimsuits and head out to make some new ones.

Afterward, Summer Abbott (Hunter King) will rip into Kyle for bailing on their meeting for this. She’ll insist that the deal’s in jeopardy, so Kyle had better get out to the car and fix it. Once Kyle calls Theo Vanderway, he’ll realize Summer lied and there was no problem at all. Kyle will urge Summer to go before showing his appreciation for Lola. He’ll be glad to be with someone who wants what’s best for him.

The Young and the Restless spoilers say Lola and Kyle will make love again, so their relationship is thriving…for now. Will Summer blow things up for this duo soon enough? We’ll give you updates as other Y&R news comes in. Stay tuned to the CBS soap and don’t forget to check CDL often for the latest Young and the Restless spoilers, updates, and news.