The Young and the Restless Spoilers: Nick Accuses Adam of Faking Amnesia – Insists Brother Wants to Avoid Consequences of Crimes

BY Heather Hughes on May 10, 2019 | Comments: 2 comments
Related : Soap Opera, Spoiler, Television, The Young and the Restless 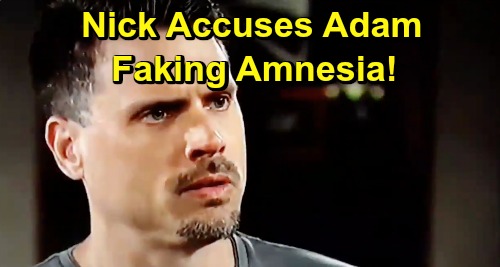 The Young and the Restless (Y&R) spoilers tease that Nick Newman (Joshua Morrow) will remain suspicious of his brother. When he first heard Adam Newman (Mark Grossman) was alive, Nick was immediately skeptical. He assured Sharon Newman (Sharon Case) that it had to be some sort of scam or lookalike situation. Nick initially couldn’t bring himself to believe that Adam was alive.

However, Sharon assured Nick that this seemed legit. She’ll be more convinced that ever after she has a conversation with Adam. There’ll be no doubt in Sharon’s mind. Once Adam returns to Genoa City and reunites with Nick, there’ll be no doubt in Nick’s mind either. Nick will buy that this is indeed Adam, but he’ll grow suspicious for a different reason. This time Adam’s story will be the problem.

Nick will think Adam’s amnesia claims are just a bit too convenient. He’ll feel like Adam made the whole thing up to avoid serving the rest of his prison sentence. Y&R fans will recall that Adam was hallucinating while locked up and away from his family. He was so out of it that he assaulted a prison guard, but Victor helped him escape – which all led up to the cabin explosion.

Of course, there are some flaws in Nick’s logic. Adam’s memory issues now wouldn’t really affect anything. Whether he remembers doing the crime or not, Adam did it. With Victor Newman’s (Eric Braeden) influence and some pulled strings, we wouldn’t worry too much about those old charges. The Young and the Restless will inevitably find a way to brush them under the rug.

Based on what we’ve heard from Adam’s shrink and Riza Thompson (Tina Casciani), it also seems like Adam has been genuinely overwhelmed by this memory mission. That could indicate that Adam has indeed been pushed too hard. Then again, it’s possible that Adam is faking and is just overwhelmed by what he’s actually recalling.

If Y&R goes the fake amnesia route, we have to wonder why. What’s the point of Adam pretending he doesn’t know his family or letting Sharon try to reach him? It’d be one thing if Adam was washing his hands of everyone he once knew, but he’s coming home. He’ll be interacting with this people on a regular basis, so why pretend he doesn’t know them?

It sounds like either Nick’s going to be wrong or Y&R’s doing a very contrived story. Regardless, it’s great that Adam’s back and can shake things up! The Young and the Restless spoilers say some hot drama’s ahead, so stay tuned. We’ll give you updates as other Y&R news comes in. Stick with the CBS soap and don’t forget to check CDL often for the latest Young and the Restless spoilers, updates, and news.