The Young and the Restless Spoilers: Mia Arrested, Rey Gets His Revenge – Lying Ex Heads to Prison for Satisfying Y&R Exit?

BY Heather Hughes on March 26, 2019 | Comments: one comment
Related : Soap Opera, Spoiler, Television, The Young and the Restless 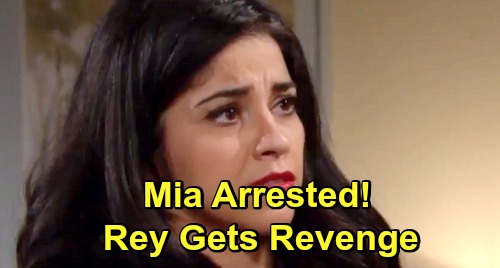 The Young and the Restless (Y&R) spoilers tease that Mia Rosales’ (Noemi Gonzalez) web of lies will be torn apart. On Tuesday, Mia admits she cheated with Arturo Rosales (Jason Canela). That naturally leads Rey to wonder if this is even his baby. Arturo’s going to wonder the same thing soon enough, so big trouble may be brewing.

Arturo’s looming exit has been confirmed, but it looks like Mia could be headed out as well. Of course, Y&R can’t just let Mia get away with her attack on Lola Rosales (Sasha Calle). It wouldn’t be very satisfying if Rey just kept the secret forever. The Young and the Restless fans want Mia to pay!

It makes no difference that Abby Newman (Melissa Ordway) was Mia’s intended target. The point is Mia assaulted a woman and deserves to go down for it. She could face attempted murder charges since Lola nearly lost her life. However, there’s one hurdle to tackle before we get to all that. This baby that Mia is supposedly carrying presents a final obstacle to justice.

It’s possible Mia is actually pregnant with Arturo’s child or even Rey’s. It’s equally possible that Y&R will stick with the original story here, which was that Mia apparently faked the pregnancy test. Perhaps the hookup rewrite was more about Arturo’s departure and the pregnancy sham will remain an exit route for Mia.

After all, Arturo and Rey will want to know the truth about this little one. They may demand updates from the doctor to know how far along Mia is. That could help them determine if Arturo is a possible “baby daddy.” Rey and Arturo could even push for a paternity test once it’s deemed safe.

That would cause everything to fall apart for Mia, who could easily still be lying. If Mia isn’t pregnant, she can’t keep up the charade indefinitely. At some point, the truth must come out. Rey would realize that Mia only lied to avoid her arrest, which means he’d probably tell the cops she’s guilty.

Mia might threaten to tell them Rey covered it up initially, but who’s going to believe her? Rey can say he only just found the earring and put it all together. The Young and the Restless spoilers say Mia could go down in a big way! Throwing a lying manipulator like Mia behind bars would be the best exit they could give her.

Do you think Mia will head to prison for Lola’s attack? Will Rey get his revenge? We’ll keep you posted as other Y&R news comes in. Stay tuned to the CBS soap and don’t forget to check CDL often for the latest Young and the Restless spoilers, updates, and news.

It’s a can’t miss week on #YR. 👏 Mia’s causing trouble, Paul’s taking charge, AND you’ll all get rocked by a massive twist! pic.twitter.com/EVZWgkR7Oy