BY Sean O'Brien on January 21, 2019 | Comments: one comment
Related : Soap Opera, Spoiler, Television, The Young and the Restless 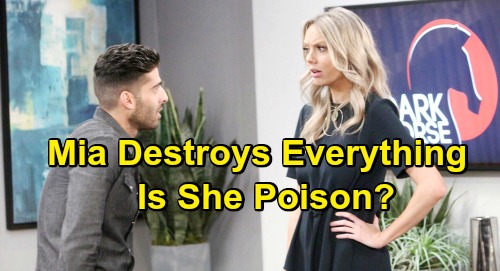 The Young and the Restless spoilers tease that Rey (Jordi Vilasuso) and Arturo (Jason Canela) don’t see another conflict coming between them, but nevertheless a repeat of the past will happen. While the Rosales’ brothers are both in love, Mia (Noemi Gonzalez) and Abby’s (Melissa Ordway) feelings are about to impact both couple’s relationship status.

It’s great that Rey and Mia want to renew their vows. Ria was on shaky ground prior to Rey leaving Florida and moving to Wisconsin, so he could assume control over the J.T. (Thad Luckinbill) investigation.

Mia followed her husband from Miami to Genoa City in recent months and has caused a stir on various occasions. Her actions stem from being insecure, as she once cheated on Rey with Arturo, who was her first love.

It must be added that Rey’s feelings for Sharon (Sharon Case) are publicly detectable. As this detective should know, everyone has varying degrees of perception. In Mia’s instance, she has accurately assessed that Sharon wants Rey and that his emotions for their landlord are real as well.

January is bitterly cold in the Midwestern part of the United States. Sometimes a heating system can go out, as Ria’s did, which resulted in Arturo being summoned. He and Mia almost reconnected romantically during that unexpected visit, while Rey and Sharon were sharing a hotel room in Kenosha, though nothing wrong happened there.

In order to calm his guilt, Arturo later told Abby that he loved her. Days later, he then goes one mega step further. Canela’s conflicted character asks his Ordway’s alter ego to get engaged. That’s fine, but doing it at Ria’s vow renewal was ill-timed, as Gonzalez’ initial reaction shot and follow through lines confirm.

Rey and Mia’s marriage appears doomed, but that outcome isn’t certain. Sure, Sharon is an option for Rey. But he genuinely loves Mia and is trying to make their revived nuptials work.

As for Mia, she seems to love both brothers. Arturo represents certain nostalgia, but remains a modern draw. It is possible that she could eventually regain whatever was had with Arturo, or Mia might find that both he and Rey cut her off.

Abby is the honest soul in this matter. She’s been true to Arturo from the start and has even accepted that Mia was his first true love. But every woman (and man) has her (his) breaking point, as any future reboot with Mia would likely prove.

Whether Arturo and Abby make it to the alter could be the larger question, as they don’t have a long history. So, as of the moment Arturo’s future plans with Abby are mostly based on hope. CDL is a leading source for everything linked to The Young and the Restless. Check back regularly for Y&R spoilers and news!