BY Marcy Cohen on May 13, 2019 | Comments: 2 comments
Related : Soap Opera, Spoiler, Television, The Young and the Restless 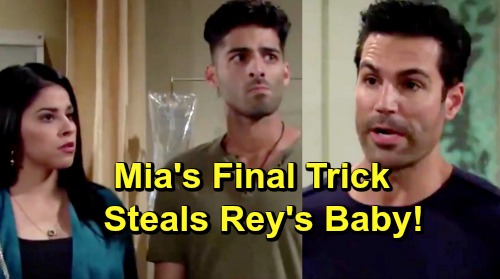 After mulling this over carefully, Paul will decide to cut Mia some slack. Lola Rosales (Sasha Calle) could have a hand in that, too. She doesn’t want to press charges for the baby’s sake, so it makes sense for Paul to just let it go. However, that still leaves the little matter of who’s bun Mia has in the oven.

It’s possible Mia is pregnant with Arturo’s kid, which could take them back to Miami to raise it. They’ll pour their hearts out to Rey this week as they try to heal their family, so this could be an “all’s well that end’s well” dual exit. After all, Rey probably wouldn’t be on board with Mia moving so far away if she was pregnant with his baby. Making it Arturo’s child would allow for a clean break.

Unfortunately, there’s no drama with that version of events. Where’s the fun in a happy ending?! Soaps are all about twists and secrets, so they need to deliver something satisfying. Mia has been nothing but manipulative from day one. Arturo the serial cheater isn’t much better. These characters are capable of doing bad things, so they should really do one more before they leave.

Will Y&R deliver a good old-fashioned paternity swap? Soap DNA tests rarely come back accurate the first time, so a switch is definitely a possibility. Mia could easily make this happen. We’re talking about someone who bought a pregnant woman’s urine and stole her ultrasound photo. That’s somebody who could pull off a paternity switcheroo without any problems.

Of course, Arturo could be the culprit instead. He might feel like this would be better for everyone. Arturo always ends up drawn to Mia, so there’s no point in fighting it. They might as well ride off into the sunset and prepare for this Rosales baby. Meanwhile, Rey would be free to live his life with Sharon Newman (Sharon Case).

Arturo would be robbing Rey of his shot at fatherhood, which is something Rey’s always dreamed of. Nevertheless, Arturo could ultimately decide the advantages outweigh the disadvantages. There’s even a chance The Young and the Restless could make this a collaborative effort between Mia and Arturo. They might consider their options and decide a rigged paternity test is the best one.

Naturally, this would set up a secret that could be exposed later. It’d be particularly useful if Y&R wanted to write Rey out down the road – or even if they wanted to shake up some “Shey” wedding plans. The truth could be revealed through some baby medical crisis or a guilty lab tech. It’d be wise for the show to leave this paternity door open as a way to create another obstacle.