BY Heather Hughes on December 16, 2019 | Comments: one comment
Related : Soap Opera, Spoiler, Television, The Young and the Restless 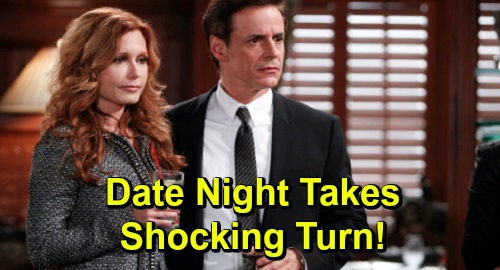 The Young and the Restless (Y&R) spoilers tease that viewers will have a chance to catch up with some characters who aren’t featured very often. If you’re a fan of a few vets that’ve been brushed aside, you’re in luck. Paul Williams (Doug Davidson), Christine Williams (Lauralee Bell), Michael Baldwin (Christian LeBlanc) and Lauren Baldwin (Tracey E. Bregman) will all be back on screen again soon.

Keep in mind that preemptions could alter the schedule a bit, but their appearances are scheduled for the week of December 16-20 right now. It looks like Y&R may deliver a double-date night, which should be a treat for anyone who’s been missing these four. It’ll be fun to hear what Lauren, Michael, Paul and Christine have been up to lately.

Of course, it just wouldn’t be a soap without a little drama! The Young and the Restless spoilers say Christine and Paul’s evening with the Baldwins will take a shocking turn. There’s no word yet on what that means, but it definitely sounds like their small gathering will bring a big surprise.

We should point out that Fenmore “Fen” Baldwin (Zach Tinker) is coming home for the holidays, so maybe he’ll play a role in all this. Y&R fans know Fen went off on tour earlier this year, which led to him getting back into drugs. However, Fen went to rehab after his parents’ intervention. He’s undoubtedly doing much better now and will have an opportunity visit his loved ones in GC.

Since this December 16-20 timeframe is just before the Christmas episodes are set to play out, it makes sense that Fen’s return might be a factor. He might inadvertently derail this double-date night and cause a pretty humorous situation. Fen’s issues were no joke, but he’s got a funny side that will likely be part of his upcoming stint.

Then again, there might be some other reason Paul, Christine, Michael and Lauren are caught off guard. Whatever the case, it’ll be nice to see some old fan favorites back in the mix. The Young and the Restless spoilers say some great scenes are coming up, so don’t miss what’s in store. We’ll give you updates as other Y&R news comes in. Stick with the CBS soap and don’t forget to check CDL often for the latest Young and the Restless spoilers, updates and news.