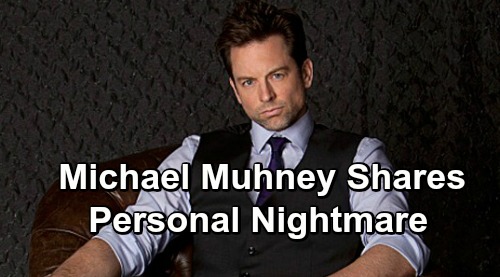 The Young and the Restless (Y&R) spoilers reveal that one CBS soap star decided to share some of his mental health struggles. Y&R fans remember Michael Muhney as Adam Newman in Genoa City. After a scandal stirred up some trouble, the show chose not to renew Muhney’s contract. He was fired in 2014 at the end of his five-year run.

Of course, we’ve seen a couple of new Adams since then. Justin Hartley took over the role before departing to pursue other projects, including NBC’s This Is Us. Now Mark Grossman is settling in nicely as The Young and the Restless’ latest Adam. Although Grossman has already earned many fans, some viewers are still disappointed that Muhney wasn’t asked back.

Muhney has always been eager to reclaim the role he lost, which led to the mental health struggles we mentioned. In a special post on Twitter, Muhney opened up about his dark thoughts and how he sought help for them. Suicide is an issue that’s touched his loved ones in a big way, so Muhney’s glad it didn’t affect his family once again.

“This is my true story,” Muhney said to kick off his statement. He noted that his wife gave him permission to discuss her mother’s death by suicide. Muhney watched how his wife suffered when through following that ordeal 14 years ago. He knew the aftermath he might leave behind, but he still faced temptation when it came to potentially taking his own life.

“Over the past five years, during several of my many bike rides around Los Angeles, with inescapable pain and frustration and tears in my eyes, my mind would wander,” Muhney admitted. “I’d think about my life insurance policy for my wife & kids. I’d imagine drifting across that double-yellow line into oncoming traffic and ending it all. All over a grotesque internet rumor and a lie.”

Muhney went on to say that he considered the darkest options, but he ultimately opted to open up to someone about his depression. His wife and mom helped him through the roughest time of his life. Muhney added that it’s taken years for him to admit his story. However, he wanted to put it out there now in hopes of helping others struggling with suicidal thoughts.

Muhney urged Young and the Restless fans and anyone else who follows him on Twitter to reach out if they’re hurting. He suggested that “if you’re in the dark place, talk to somebody. Get help.” That’s certainly good advice, so let’s hope Muhney’s statement makes a difference to someone out there who needs it.