BY Heather Hughes on June 8, 2019 | Comments: one comment
Related : Soap Opera, Spoiler, Television, The Young and the Restless 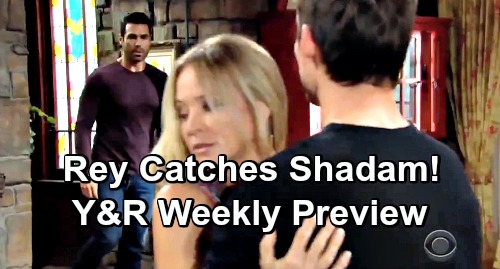 The Young and the Restless (Y&R) spoilers for the week of June 10-14 tease that some bombshells are brewing in Genoa City. Adam Newman’s (Mark Grossman) war with his brother will definitely heat up. Nick Newman (Joshua Morrow) will stand his ground on the topic of Christian Newman (Jude and Ozzy McGuigen) and who gets custody. He’ll make it clear that he’s his father and he’s not giving up the title.

However, Nick isn’t just going to roll over and accept defeat at Dark Horse either. The Young and the Restless spoilers say Nick will turn to Jack Abbott (Peter Bergman) for help first, but Jack will have to pass. Jabot isn’t exactly in great shape financially either thanks to all the drama Ashley Abbott (Eileen Davidson) caused, so Jack doesn’t have spare cash to bail Nick out.

As a result, Nick will have no choice but to seek Victor Newman’s (Eric Braeden) help. He’ll want Vic to help him save Dark Horse and stop Adam from ruining all their lives. Nick will think Victor needs to open his eyes and accept that Adam can’t be the golden child. Victor, on the other hand, will just want peace. He’s fighting a private health battle, so he’ll want his kids to find a way to come together.

Based on Y&R’s weekly promo, Victor will maintain that Adam’s future is at Newman Enterprises. He’ll still want Adam to take the throne, so he’ll assure him that he’s the only person who can continue his legacy.

That promo also promises lies just before Adam says there are still unresolved feelings between them. Of course, that may really be more of a half-truth. Adam had a steamy dream about Sharon, so we know he’s feeling something! Even so, Adam’s confession may be more about manipulating Sharon than rekindling any spark.

Regardless, Sharon will cause some drama with Rey Rosales (Jordi Vilasuso) by keeping secrets. He’ll confront Sharon about what’s going on with Adam and accuse her of lying, so “Shey” could start to crumble if they aren’t careful. Adam will have one more problem to deal with thanks to Kevin Fisher (Greg Rikaart), who will accuse Adam of kidnapping Chloe Mitchell (Elizabeth Hendrickson).

Despite Adam’s denial, Kevin will demand a trade: Chloe for Phyllis Summers (Gina Tognoni). The Young and the Restless spoilers say Kevin’s move will prompt a change of plans for Adam, so he’ll have an even bigger mess on his hands. Kevin will contend that if he doesn’t get Chloe back, Adam will wish he’d stayed dead!

It sounds like a great week’s on the way. We’ll give you updates as other Y&R news comes in. Stick with the CBS soap and don’t forget to check CDL often for the latest Young and the Restless spoilers, updates and news.