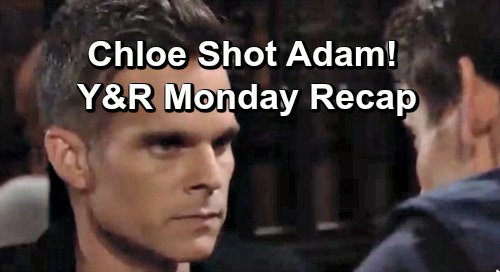 The Young and the Restless (Y&R) spoilers for Monday, June 10, tease that Summer Newman (Hunter King) will confide in Nick Newman (Joshua Morrow). She’ll complain about Phyllis Summers’ (Gina Tognoni) recent behavior, but she’ll admit she’s mostly concerned. Nick will hint that Phyllis just caused trouble for him and may have left Genoa City to clear her head.

Afterward, Summer will meet up with Jack Abbott (Peter Bergman) and share her worries. They’ll talk about Phyllis crashing Billy Abbott (Jason Thompson) and Victoria Newman’s (Amelia Heinle) recommitment ceremony. Jack will argue that Adam’s probably the one to blame for that. When Summer asks for Adam’s phone number, Jack won’t think it’s a good idea to contact him.

At the tack house, Adam will get a text from someone and wonder who’s behind it. However, the sender will insist he has something Adam wants. He’ll point out that Adam knew he’d be hearing from him. The Young and the Restless spoilers say Adam will head to the requested location, which is a dive bar. That’s when Kevin Fisher (Greg Rikaart) will appear and leave Adam amused.

Adam won’t think there’s anything Kevin could possibly have that he wants. Kevin will suggest Adam would be surprised. He’ll insist he’s got Adam’s new girlfriend, Phyllis, and intends to trade her for kidnapped Chloe Mitchell (Elizabeth Hendrickson). Kevin will think that’s a fair exchange, but Adam will scoff at the idea. He’ll note that Phyllis isn’t his girlfriend, so Kevin can do what he wants with her.

Furthermore, Adam will contend that he doesn’t have Chloe. He’ll reveal that Chloe shot him and he had his private investigator dig around. Adam will note that Kevin and Chloe had already cleared out of their house when his guy arrived.

Kevin will admit they fled, but things have changed. Chloe is missing, so he’ll demand her back. Adam will remind Kevin that to go forward with his claims, he’d have to confess that Chloe is still alive. That’d mean she’d face attempted murder charges.

After Adam exits, Kevin will throw back a drink angrily. Meanwhile, Adam will head back to Dark Horse. Nick will make it clear to Adam that he’s not giving Christian Newman (Jude and Ozzy McGuigen) up for any reason. He’ll also bring up the fact that Phyllis can’t be reached. Adam will deny any involvement, but Nick will promise to make Adam pay if he’s lying.

Adam will return to the tack house and make a phone call. He’ll suggest that the plan has changed since Kevin is an idiot. At Devon Hamilton’s (Bryton James) penthouse, he’ll enjoy some flirty moments with Elena Dawson (Brytni Sarpy) before they shower together. Unfortunately, the mood will take a sour turn when Elena opens a shocking email.

Elena will learn her student loan debt has been paid off, so she’ll assume Devon’s responsible. He’ll confess that it was indeed him and suggest he was just trying to pay it forward. Elena will rant about Devon butting in her finances when he had no right to do so. She won’t think Devon really knows her if he thought she’d be OK with this.

Devon will do his best to smooth things over. He’ll understand that Elena views this as a betrayal, but he’ll assure her it was a no-strings-attached gift. Elena will still feel like a charity case, but Devon will offer a sincere apology and a hug.

Y&R spoilers say Elena will manage to calm down, but she’ll think it’s best if they take a step back. She’ll plan to go on tour with Jett Slade (Gilbert Glenn Brown) and Ana Hamilton (Loren Lott) for a bit. Later, Devon will open the door of Phyllis’ suite for Summer. She’ll panic when she spots Phyllis’ keys, outfits and everything else she would take if she’d left willingly.

Summer will get on the phone with Nick right away and insist that something’s definitely happened to her mom. While Summer frets over Phyllis, Victor Newman (Eric Braeden) will warn Dr. Nate Hastings (Sean Dominic) not to scare Nikki Newman (Melody Thomas Scott). He’ll plan to beat the odds and refuse to let Nikki worry for no reason.

After Nikki arrives and seeks updates, Nate will do as he was told and suggest they’ll know more after Victor’s new tests. He won’t think Nikki should jump to the worst-case scenario. Once Nate heads out, Nikki will push Victor to tell the kids. Victor won’t want to add to the conflict and drama, but he’ll be glad to have Nikki in his corner.

Talk will turn to Victor’s focus on work. Nikki will think it’s time to cut back and let his health take center stage. Victor will promise to give the idea some thought. The Young and the Restless spoilers say Victor may have no choice but to lighten his workload as his condition deteriorates.

We’ll keep you posted as other Y&R news comes in. Stick with the CBS soap and don’t forget to check CDL often for the latest Young and the Restless spoilers, updates, and news.