BY Heather Hughes on June 7, 2019 | Comments: one comment
Related : Soap Opera, Spoiler, Television, The Young and the Restless 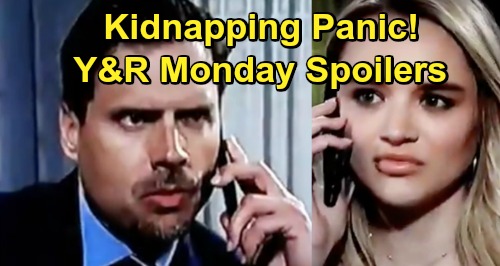 The Young and the Restless (Y&R) spoilers for Monday, June 10, tease that we’ll see more of Kevin Fisher’s (Greg Rikaart) dark side. He had turned from his wicked ways before he left town, but now he’s reverted to bad boy status. Soft and cuddly Kevin is gone until he deals with his problem.

Of course, Kevin has a good reason going dark again – two good reasons actually. He’d probably do just about anything to protect Chloe Mitchell (Elizabeth Hendrickson) and their daughter, Bella Fisher (Kali May Kinder). Y&R fans know Kevin’s been living a secret life in Oregon with Chloe and Bella. Now that Adam Newman (Mark Grossman) is back to shake things up, Kevin has to shake things up, too.

Since Kevin is Phyllis Summers’ (Gina Tognoni) kidnapper, he’s set the tone for his stint. If Kevin’s willing to do that, what else is he willing to do? The Young and the Restless spoilers say Kevin will meet with Adam to set up a deal and hope it saves what’s important to him. If Phyllis has to be collateral damage in his plot, then so be it. Kevin will feel like he’s gotta do what he’s gotta do.

In the meantime, Summer will stop by her mom’s hotel room. Things were tense between them when Phyllis had an outburst at the Jabot Collective celebration. Phyllis made another scene by crashing Billy Abbott (Jason Thompson) and Victoria Newman’s (Amelia Heinle) recommitment ceremony. Summer will feel like Phyllis is spiraling out of control, so she’ll want to check on her this Monday.

However, that won’t be possible since Phyllis just got snatched. Phyllis is stuck in a basement somewhere, so all Summer will find is the aftermath of her kidnapping. Some clues will point Summer in the direction of trouble. The Young and the Restless spoilers say Summer will dial Nick Newman’s (Joshua Morrow) number and express her fears. She’ll truly believe something terrible’s gone down.

Elsewhere, Elena Dawson (Brytni Sarpy) will uncover some surprising information. She’ll determine that her student loans have been paid off, so it won’t take long to guess who did it. Devon Hamilton (Bryton James) is behind this act of kindness, but Elena will scold him instead of thanking him. She won’t think it was Devon’s place to throw money around without her knowledge.

PREVIEW FOR NEXT WEEK! #YR pic.twitter.com/al6SNmG9XP