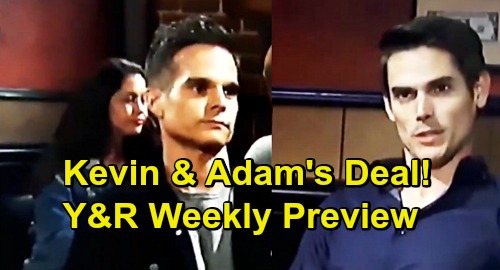 The Young and the Restless (Y&R) spoilers preview for the week of June 10-14 tease that some tricky situations are coming up. First, Dr. Nate Hastings (Sean Dominic) will offer some advice. He previously assured Victor Newman (Eric Braeden) they could fight this, but he may shift gears and push Victor to set realistic expectations.

Victor has a life-threatening blood disease that’s quite rare, so he has to accept that battling it will be difficult. Nate will think it’d be easier if Victor kept his family in the loop on his condition. He’ll at least think Nikki Newman (Melody Thomas Scott) should get updates along the way. Victor revealed his diagnosis to Nikki, but she needs to know about his progress or setbacks as his treatment proceeds.

Unfortunately, Victor won’t agree that it’d be helpful. He’ll tell Nate he doesn’t care how long the odds against him are. Victor will vow to beat them, but he’ll refuse to upset his wife unnecessarily. He’ll make it clear that this has to stay between them, but something tells us pushy Nikki will demand more info.

Nikki can be just as stubborn as Victor, so she may force him to make a family announcement at some point. The Young and the Restless spoilers say Victor will gather his loved ones to deliver big news soon, so sharing his diagnosis is an option. Whatever the case, Victor will be adamant that his future is bright. He’ll refuse to believe this rare blood disease will end in a deadly outcome.

Other Y&R spoilers say Summer Newman (Hunter King) will make a disturbing discovery. She’ll see signs of a struggle in Phyllis Summers’ (Gina Tognoni) suite and immediately get on the phone with her dad. Nick will be surprised by Summer’s rattled tone. She’ll note that she’s in Phyllis room at the GCAC and argue that something has definitely happened to her.

Nick may wonder if Summer’s sure about that. He might think Phyllis finally got tired of being a pariah and took off. However, Summer will spell out her reasons for being concerned – and she’ll have some good ones. Y&R fans know Summer is indeed right that Phyllis is in trouble. Phyllis was kidnapped by Kevin Fisher (Greg Rikaart), who’ll push Adam to make a deal with him in the week ahead.

The Young and the Restless spoilers state that Adam will approach this meeting with skepticism. He’ll suggest he can’t imagine that Kevin would have anything he wants. Y&R’s latest preview video shows Kevin saying, “You’d be surprised.” That’ll intrigue Adam, so he’ll urge Kevin to surprise him then. He’ll be interested in what Kevin has to offer, which will apparently tie in with Phyllis the hostage.

It sounds like some exciting drama’s ahead in Genoa City. We’ll keep you posted as other Y&R details emerge. Stay tuned to the CBS soap and don’t forget to check CDL often for the latest Young and the Restless spoilers, updates, and news.