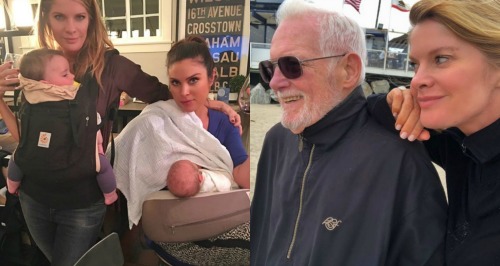 The Young and the Restless (Y&R) spoilers reveal that one CBS soap star recently had a lot to celebrate. Y&R fans know Michelle Stafford as Phyllis Summers in Genoa City – and it hasn’t been that long since she departed General Hospital as Nina Reeves (now played by Cynthia Watros). Stafford always works hard to deliver quality performances, but she certainly takes time to enjoy her friends and family, too.

On Instagram, Stafford had some exciting birthday wishes to pass along. She gave a shout-out to her pal, Nadia Bjorlin, who plays Chloe Lane on Days of Our Lives. Stafford posted an old pic of them in Mommy mode to show their fun connection. She also offered some sweet words for Bjorlin on her special day, so let’s take a look at Stafford’s message.

“Happy Birthday to my long time Co-conspirator,” Stafford said. “You are so insanely loyal with the BIGGEST heart! I love you lil sis!” It’s always nice to see soap stars supporting each other and showing some love. Social media can get a bit nasty at times with bullies and mean comments, so something like an uplifting birthday wish is a welcome relief.

However, Stafford had even more to celebrate. The Young and the Restless actress recently had a birthday in her own family as well, so she included another pic and message in a separate post. Stafford’s father is another year older, so she took time out to honor her dad and express gratitude for having him in her life. They were all smiles in the photo Stafford offered up to her fans.

Stafford’s post said, “Happy Birthday to my AMAZING INCREDIBLE Father!!! How lucky I am to have you as a dad!!!” An Instagram story featured Stafford’s dad spending some time with his grandkids, so it sounds like he had a big day with the fam. It’s great that they were able to get together and party for this important occasion.

Happy Birthday to my long time Co-conspirator. You are so insanely loyal with the BIGGEST heart! I love you lil sis! @nadiabjorlin 💕💃🏻🍾

Happy Birthday to my AMAZING INCREDIBLE Father!!! How lucky I am to have you as a dad!!! ☺️