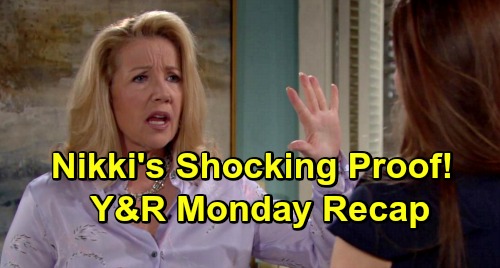 The Young and the Restless (Y&R) spoilers for Monday, April 15, tease that Victoria Newman (Amelia Heinle) will catch up with her mom. She’ll tell Nikki Newman (Amelia Heinle) about tackling her issues and how Billy Abbott (Jason Thompson) showed up in Las Vegas. Victoria will admit they’re back together, but she’ll promise they’re going to take things slow.

Talk will turn to Victor Newman (Eric Braeden), who’s been talking to someone mysterious in Vegas and lying about his whereabouts. Nikki will be infuriated when she finds out, so she’ll leave Victor an angry voicemail and urge him to come home ASAP.

Y&R spoilers say Nikki will be determined to figure out what Victor’s been up to. She’ll head to Victor’s office with Victoria so they can rummage around. Victor will call while they’re in there, so Nikki will gripe at him over the phone. He’ll keep it short and sweet before hanging up.

Next, Nikki will stumble across a Nevada doctor bill. She’ll fear that Victor is sick, but a quick search online will reveal that this doctor is a psychiatrist. Victoria and Nikki will realize Victor would never open up to a shrink himself, so they’ll ponder why Victor would be paying a shrink near Vegas. Could this be connected to Adam Newman’s (Mark Grossman) upcoming return?

Across town, Cane Ashby (Daniel Goddard) will apologize to Billy Abbott (Jason Thompson) for his recent outburst. Cane held Billy responsible for destroying his marriage, but he’ll now see that he only has himself to blame. After Billy leaves, Traci Abbott (Beth Maitland) will learn that Cane still has hope for a reunion with Lily (Christel Khalil). She’ll seem uneasy about that as well as Cane’s request for her help.

Later, Cane will talk to Traci about how he’s struggled to be honest with his wife. He’ll suggest that he makes these mistakes because he doesn’t believe he deserves Lily. Traci will feel like Cane can still redeem himself since he’s willing to take a long, hard look at his problems.

Other Young and the Restless spoilers say Billy and Jack will discuss Jabot’s battle with My Beauty. Jack will be brimming with confidence, but Billy will still seem worried. They’ll also talk about Billy and Victoria being an item again. After Billy reveals that he plans to move in with Victoria, it’ll be Jack’s turn to express concern. He’ll warn Billy about taking this at a different speed than Victoria wants.

Billy will eventually end up at Victoria’s place with an engagement ring. He’ll tell himself he’s fine with waiting a few more minutes since he’s already waited his whole life for her. At the penthouse, Devon Hamilton (Bryton James) will compliment Jett Slade’s (Gilbert Glenn Brown) singing and suggest signing him to LP. Jett will think his moment has come and gone, but Devon will praise his timeless voice.

Nearby, Elena Dawson (Brytni Sarpy) will grin over Devon’s sweet words. Over at Abby Newman’s (Melissa Ordway) new restaurant, Jack will check it out and pitch a joint unveiling. He’ll think Jabot Collective could on Abby’s opening night, but she’ll pass since it’d mean getting in the middle of Jack’s feud with Ashley Abbott (Eileen Davidson).

Once Jack heads home, Traci will show him Ashley’s latest ad for Jack of Hearts. It’ll feature Dominique Caroll (Alice Hunter) with a hunky male model. Jack will call Ashley to congratulate her on her latest move, but you can bet he’s got some tricks of his own in store.

Back with Abby, she’ll show off the new stage at her restaurant. Abby will want Devon to feature some of his LP artists there as entertainment. When Devon gets home, he’ll convince Jett and Ana Hamilton (Loren Lott) to play on opening night. Devon will also ask Elena if she’d like to trade their coffee date for an invitation to the restaurant opening, so she’ll get on board.

Finally, The Young and the Restless spoilers say Arturo Rosales (Jason Canela) will track down Abby for a chat. Of course, if he’s hoping to reunite, he’d better keep dreaming! Abby has made it crystal clear that she’s done with Arturo for good.

Y&R fans will want to check out Monday’s terrific episode. We’ll give you updates as other news comes in. Stay tuned to the CBS soap and don’t forget to check CDL often for the latest Young and the Restless spoilers, updates, and news.