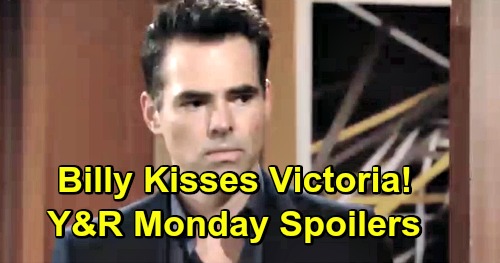 The Young and the Restless (Y&R) spoilers for Monday, April 8, tease that Billy Abbott (Jason Thompson) will try to get through to Victoria Newman (Amelia Heinle). After showing up in Las Vegas on Friday’s new Y&R episode, April 5, Billy will be ready to fight for his future with her. He’ll want to be the one to help Victoria put her trauma behind her and move on with her life.

Naturally, Victoria will be hesitant to dive in. She got burned after her reunion with J.T. Hellstrom (Thad Luckinbill), so she’s wary of reuniting with another ex. The J.T. situation was completely different, but Victoria will fear a similar outcome of heartbreak. She won’t know if she can go through that again, but Billy will insist they can make it work this time.

In Monday’s Y&R episode The Young and the Restless spoilers say Billy will push for a new chapter. He’ll insist that he’s already read to the end of the book and it’s “Villy” all the way. Billy will think Victoria knows they’re meant to be deep down. He’ll want Victoria to admit they’re going to get their happily ever after.

Victoria will remain uncertain, but Billy will keep at it. He’ll insist that he wants to give Victoria the kind of life she doesn’t have to run from. The Young and the Restless spoilers say Billy will kiss Victoria and hope for the best. It looks like she’ll cave in on their reunion soon, so Billy will just have to keep making Victoria feel safe and loved. She could use his support now more than ever.

Over with Sharon Newman (Sharon Case), she’ll mull over Rey Rosales’ (Jordi Vilasuso) baby secret and what it means for their future. Sharon won’t be happy that Rey kept this from her. She obviously won’t be thrilled he could have a permanent tie to Mia Rosales (Noemi Gonazlez) either.

However, Sharon may give Rey the chance to share his side of the story and make a pitch for their continued romance. She’s crazy about Rey, so you can bet this isn’t the end of the road. Things could get bumpy for Rey and Sharon, but Y&R will undoubtedly want to take advantage of this pairing they’ve been building to for months.

Still, Mia will cause some issues with her baby drama at some point during the week of April 8-12. Her miscarriage scare will lead to trouble, so stay tuned. We’ll give you updates as other Y&R news comes in. Stick with the CBS soap and don’t forget to check CDL often for the latest Young and the Restless spoilers, updates, and news.