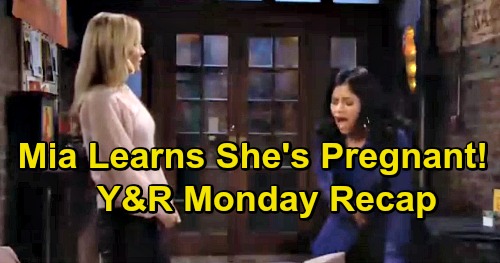 The Young and the Restless (Y&R) spoilers update and recap for Monday, April 8, tease that Billy Abbott (Jason Thompson) and Victoria Newman (Amelia Heinle) will bicker in Las Vegas. He’ll object to her random hookup and this wild attempt to get away from her problems. However, Victoria will point out that she’s single and can do whatever she wants.

Billy will eventually admit he has no room to talk. He’s done some things he’s not proud of, so he’ll encourage Victoria to do her worst. Victoria will rip into Billy for his constant drama and all the times he’s broken her heart. Billy will insist that if they try again, it’ll be different. He’ll want Victoria to accept that they’re meant to be together.

The Young and the Restless spoilers say Billy will plant a kiss on Victoria, which she’ll reciprocate. Unfortunately, their make-out session will be interrupted by Brandon Rose’s (Mitch Eakins) text. Brandon will note that a high-stakes poker game is happening tomorrow night. He’ll allude to Victor Newman (Eric Braeden) potentially being there, so Victoria will tell Billy something’s up with her father.

At Rey Rosales’ (Jordi Vilasuso) place, Sharon Newman (Sharon Case) will confront him about the ultrasound photo. Rey will point out that he’s not even sure Mia Rosales’ (Noemi Gonzalez) baby is his. Sharon will determine that Arturo Rosales (Jason Canela) is the other option, but Rey’s secret-keeping will still bother her. However, they’ll work through this when Rey insists Sharon’s the one he wants.

Sharon won’t think Mia’s going to leave them alone, so she’ll decide to handle this herself. At the athletic club, Mia will be chatting with the woman she seemingly bought the urine from at the hospital. She’ll get a call about meeting up with Sharon at Crimson Lights and head right over.

On the patio, Sharon will threaten to have Mia arrested if she shows up on her property again. She’ll think Mia is insecure and desperate for any kind of attention. After Sharon takes a jab about Arturo, Mia will fire back. She’ll contend that Sharon is just the other woman, but she’s giving him the baby he’s dreamed of.

Sharon will argue that Rey can be in his kid’s life and leave Mia out of it. She’ll think Mia’s a mess, but Mia will snap that she brings excitement to Rey’s life unlike boring Sharon. Y&R spoilers say Mia will suddenly clutch her abdomen in cry out in pain, so Sharon will take action. Despite Mia’s protests, Sharon will dial Rey’s number and push Mia to see a doctor at the hospital.

Mia’s protests will continue as the doctor takes her back. She’ll get a huge shock when the doctor does a real ultrasound and there’s actually a baby. Mia will request a moment alone with her doc. She’ll confess she wasn’t certain of her pregnancy, but her doctor will confirm she’s about 12 weeks along.

Over with Sharon, she’ll vow to stand by Rey no matter what. They’ll hug as Mia glares at them through the glass. On the fire escape, Tessa Porter (Cait Fairbanks) will get back into the swing of songwriting. She’ll come up with something she thinks is pretty good, so she’ll play it for Mariah Copeland (Camryn Grimes).

Mariah will record the new song and assure Tessa that it has hit potential. She’ll believe Devon Hamilton (Bryton James) will want to get in on this, but Tessa won’t think that’s a good idea. They’ll get into an argument, but Mariah will insist that it’s happening. She’ll play the song for an impressed Devon, but he’ll point out that he can’t make any promises.

At the penthouse, Devon will talk to Ana Hamilton (Loren Lott) about Tessa’s new tune. She’ll want to hear Tessa live, so Mariah will arrange for Ana to listen at the coffeehouse. The Young and the Restless spoilers say the performance will go well, so it looks like Tessa may get the second chance she’s hoping for.

Y&R fans won’t want to miss Monday’s exciting episode. We’ll give you updates as other news comes in. Stay tuned to the CBS soap and don’t forget to check CDL often for the latest Young and the Restless spoilers, updates, and news.