The Young and the Restless Spoilers: Week of April 8 – Lola Tempts Kyle, Wants to Get a Room – Summer’s Hubby Hooks Up with True Love 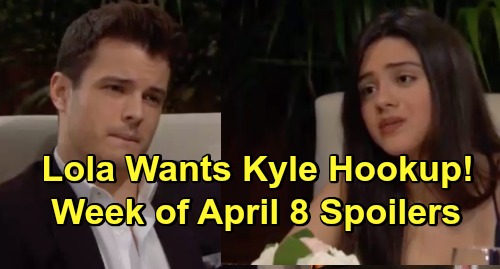 The Young and the Restless (Y&R) spoilers tease that Lola Rosales (Sasha Calle) will take matters into her own hands. She’s been quietly pining for Kyle Abbott (Michael Mealor) while he settles into his marriage to Summer Abbott (Hunter King), but she won’t be able to take it anymore. On next week’s new Y&R episodes, April 8 to April 12, Lola will request a meeting with Kyle to discuss a proposal. She’ll think it’s time to talk about where they really stand.

Lola may point out that they’re both miserable and still very much in love. Kyle can’t deny that. He cares about Summer, but Lola’s the woman who still has his heart. What Lola says next will catch Kyle off guard. Lola will suggest that she wants to see what they could be together. When Kyle wonders what she means by that, Lola will contend that they should go get a room.

Naturally, Kyle may have some reservations about taking this step with Lola. For starters, Lola is a virgin and was always hesitant to jump into bed with Kyle. She wanted to be sure she was waiting for the right guy. Now she’s letting desperation drive her decisions. Lola’s willing to throw away her virginity on a man who’s already married to someone else.

The Young and the Restless spoilers say that’s another issue for Kyle to consider. Even if he can get past exploiting Lola’s vulnerability, Kyle is Summer’s husband. It may be a sham marriage, but it’s a legal one and Summer truly loves him. Kyle may worry about getting caught or just feel like it’s wrong after making those vows.

However, Lola may point out that Summer drove them to this. She insisted on marrying Kyle when she knew he still loved Lola. There are extenuating circumstances, so Lola may think an affair is justified. Honestly, it seems she won’t even care as long as she gets Kyle into bed. Lola might feel like this is what he wanted and will win him over.

Of course, Y&R fans know it was never just about sex for Kyle. That’s certainly something he wanted to experience with Lola, but he wants the total package here. Kyle wants to feel close to Lola in all the ways that matter. He wants a life with her, but Lola may contend that they can start with one night. One night to see if they’ve got the spark they think they do.

The Young and the Restless spoilers say Kyle will engage in some risky business, so he could end up going for it. If Lola can convince him this is what she wants, Kyle may give in to temptation and hit the sheets with his true love! We’ll give you updates as other Y&R news comes in. Stick with the CBS soap and don’t forget to check CDL often for the latest Young and the Restless spoilers, updates, and news.