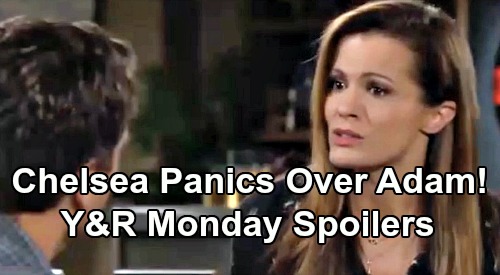 The Young and the Restless (Y&R) spoilers for Monday, August 12, tease that Chelsea Newman (Melissa Claire Egan) will feel anxious and uncertain about the future. On Friday, Chelsea takes Connor Newman (Judah Mackey) to reunite with his father. She agrees to let Connor spend the night at Adam Newman’s (Mark Grossman) place, but only if she stays the night as well.

Of course, that should stir up some old, complicated feelings for Chelsea. Being back at the penthouse with Adam close by could reignite something in her heart. Chelsea might tell herself it’s fear and that’ll be at least partly true. However, Chelsea may have to start asking herself why she’s really afraid. Is it just because she thinks Adam’s a threat or is it because she’s afraid of letting herself love him?

Unfortunately, Chelsea may not be ready to ask the tough questions and resolve her issues. The Young and the Restless spoilers say Chelsea will have to deal with her fight-or-flight instincts. Nick Newman (Joshua Morrow) will certainly want Chelsea to stay by his side so they can fight Adam together. Chelsea, on the other hand, will be leaning toward flight. Running has always been her go-to response.

Nick will try to figure out Chelsea’s reasons in Monday’s Y&R episode. He might wonder if Chelsea’s running from Adam or from him. Nick may feel like Chelsea’s scared to settle down in Genoa City and let herself be happy. He might even admit he’s starting to envision their future again, and he’s seeing great things in it. Nick will just want Chelsea to remain in town so they can make his vision a reality.

We’d still say Chelsea’s complex feelings for Adam will remain a factor, but she’ll claim this is all about keeping Connor. Whatever the case, Chelsea has a shocker headed her way on Tuesday, August 13 – and it’ll come courtesy of Daryl Tulane (Gordon Thomson), the lawyer she knows from Baton Rouge. Perhaps Monday will set up Tuesday’s bomb, which might convince Chelsea to stick around.

In the meantime, Adam will have his own problems to deal with. He’ll probably be frustrated when Chelsea pulls back after her overnight stay. Adam claims to want Sharon Newman (Sharon Case) when he’s with her, but the “Chadam” family is truly the real dream. It’s tough to believe Adam wouldn’t choose it if it was an option.

For now, Adam will have to contend with Victor Newman’s (Eric Braeden) meddling. He’ll be faced with a restraining order – most likely one that says he can’t be near Nick. Adam may think this has Victor written all over it. He’ll confront his dad about siding with Nick in the custody battle and insist this was Victor’s doing. It’s a surefire way to make Adam look the real instigator of conflict.

Adam won’t like losing his upper hand in the fight for Christian Newman (Alex Wilson), but perhaps he won’t lose it for long! The Young and the Restless spoilers say Adam will retaliate soon, so stay tuned. We’ll give you updates as other Y&R news comes in. Stick with the CBS soap and don’t forget to check CDL often for the latest Young and the Restless spoilers, updates and news.