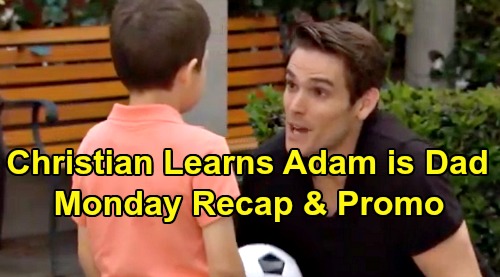 The Young and the Restless (Y&R) spoilers recap for Monday, August 5, tease that Phyllis Summers (Michelle Stafford) will stop by Adam Newman’s (Mark Grossman) penthouse with an offer to make. She’ll want to purchase the Grand Phoenix for $10 million, which she’d pay in instalments. Adam will demand $15 million and won’t be willing to negotiate, so Phyllis will head for the exit.

Michael will bump into Phyllis on his way to see Adam, but he won’t fill her in on the business they have to discuss. Once they’re alone, Adam will praise Michael for his good work. Michael filed a petition with the courts to secure a visit with Christian Newman, so Adam will be grateful. He’ll insist Michael’s going to serve as his attorney until Michael locks in the DA position and takes over.

At Nick Newman’s (Joshua Morrow) place, Chelsea Newman (Melissa Claire Egan) will mull over all the money she now has in her account. She won’t think her business would be the same without Chloe Mitchell’s (Elizabeth Hendrickson) involvement. Chelsea won’t know what her next venture should be, but she’ll vow not to make a comeback in conning.

At Society, Kyle Abbott (Michael Mealor) will balk when Theo Vanderway (Tyler Johnson) revisits the bachelor party idea. He’ll fume about Theo causing trouble with Lola Rosales (Sasha Calle) and Celeste Rosales (Eva LaRue), but Theo will note that he didn’t reveal everything. Next, Phyllis will approach their table and rip into Kyle for breaking Summer Newman’s (Hunter King) heart.

Afterward, Theo will talk to Phyllis about Grand Phoenix launch party plans. She’ll like his business ideas, but she’ll warn things are different as far as her daughter’s concerned. Theo will work to win Phyllis over by ganging up on Kyle. He’ll agree that what Kyle did to Summer was terrible. Phyllis will suggest that some people can’t face who they really are as Theo looks thoughtful.

Other Young and the Restless spoilers say Kyle will meet up with Mariah Copeland (Camryn Grimes) at Crimson Lights. After he vents about Theo, Mariah will offer some advice and shift gears to bachelor party suggestions. She’ll decide she’ll be the one to throw Kyle’s bash, so she’ll just combine it with Lola’s bachelorette party.

At the park, Billy Abbott (Jason Thompson) will accuse Adam of messing with him by putting the doll in his bed. Adam will deny it and contend that he wouldn’t disrespect Delia Abbott’s (Sophie Pollono) memory. He’ll inform Billy that he’s about to spend time with Christian, so Billy will suggest Adam should treasure every moment.

Back with Nick, he’ll get an infuriating call from Adam. Y&R spoilers say Adam will point out that Victoria Newman (Amelia Heinle) violated the judge’s ruling. He got it straightened out and is about to visit Christian…and will reveal he’s the boy’s father. Nick will be furious, but Chelsea’s worried about what’ll happen if he interferes.

At the coffeehouse, Nick will lash out at Michael and blame him for what’s about to happen with Christian. He’ll assume Adam’s got something serious to hold over Michael’s head. In the park, Adam will play soccer with Christian and show him a trick. He’ll get Christian thinking about Connor Newman (Judah Mackey) and note that they’re brothers. Adam will insist he’s Connor’s daddy and Christian’s real daddy, too.

Nick will approach just in time to hear Adam’s confession, so major drama’s about to go down! Back at Society, Chelsea will encounter Billy and admit she intends to remain in town. They’ll discuss Chelsea’s inheritance briefly before Billy suggests he’s glad Adam didn’t draw her back in.

Billy will bring up the doll situation and how Adam’s sparked more nightmares lately. Chelsea will be certain Adam wouldn’t have planted that doll, but Billy won’t buy that Adam’s made any kind of changes. Once Billy returns home, he’ll have a hard time getting to sleep.

Over with Theo again, he’ll speak with Phyllis about Adam reaping the rewards of the work she put in. Phyllis won’t seem worried since she’s got another item on the agenda. The Young and the Restless spoilers say some great scenes are coming up. We’ll give you updates as other Y&R news emerges. Stay tuned to the CBS soap and don’t forget to check CDL often for the latest Young and the Restless spoilers, updates and news.