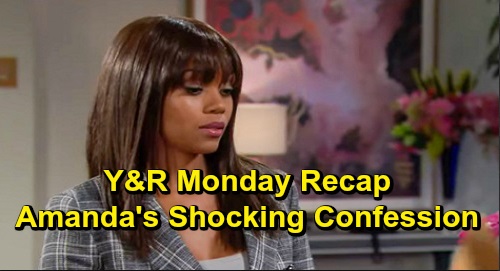 The Young and the Restless (Y&R) spoilers recap for Monday, December 16, teases that Amanda Sinclair (Mishael Morgan) will drop her guard a bit with Billy Abbott (Jason Thompson). At the dive bar, Amanda will admit she’s an orphan who grew up in foster homes. She’ll talk about figuring out her professional life, but having trouble in the personal department.

Amanda will allude to some people hiding monsters underneath their masks. It’s why she doesn’t let anyone get too close. After Billy takes a call from Victoria Newman (Amelia Heinle), he’ll nix the idea of meeting and promise to see her at home later. Amanda will leave before Billy hangs up and is invited to join a poker game. Billy will be proud of himself after he turns down the opportunity.

As for Amanda, she’ll get a call of her own at Society. Amanda will seem nervous when no one speaks on the other end of the line. At Devon Hamilton’s (Bryton James) penthouse, The Young and the Restless spoilers say he’ll give Elena Dawson (Brytni Sarpy) an apology. Devon will confess Elena deserves somebody better, so he’ll hope to make some changes and stop pushing her away.

Elena won’t think Amanda has to be their enemy. She’ll also urge Devon to remember that she wants all of him – even the parts he’d prefer to hide. Devon will reassure Elena and insist she’s his everything. After Elena heads off to work, Devon will pull out the dossier Victor Newman (Eric Braeden) delivered. He’ll also speak with someone over the phone about Amanda’s ex-fiancé, Ripley Turner.

It turns out Amanda and Ripley filed restraining orders against each other before Amanda came to Genoa City. Back at Society, Lola Abbott (Sasha Calle) will wonder why Theo Vanderway’s (Tyler Johnson) always working there when he has an office. Theo will mention Lola’s inspirational food before talk turns to his new Jabot emojis – or Jabojis.

Lola and Theo will also discuss how he turned down Ashley Abbott’s (Eileen Davidson) offer to work in Paris. Theo will contend that he wants to prove somebody wrong. At Jabot, Y&R spoilers say Summer Newman (Hunter King) will be working late with Kyle Abbott (Michael Mealor). They’ll joke around before Summer gets Lola on a video chat so she can encourage Kyle to go home.

Kyle will indeed ask Lola to meet him at their apartment, but Lola will insist it’s too busy to take off. She’ll show Kyle the crowd, which will let him know Theo’s there with Lola. Once the video call ends, Lola will encourage Theo to be her guinea pig for new recipes. She’ll suggest she can make Theo his favorites and it’ll be their little secret.

Back with Summer, she’ll note that her split from Theo was probably for the best. Kyle will assure Summer that she means more than she knows. He’ll quickly add “to Jabot” and insist he’s where he needs to be tonight.

At the coffeehouse, Nate Hastings (Sean Dominic) will admit he’s concerned about Elena, who seems worn down from everything she’s been dealing with. Nate will promise he’s got Elena’s back at the hospital. He’ll think Elena should trust that Devon will be able so sort through his issues.

At home, Victoria will find a card left by Billy that urges her to enjoy the peace and quiet. She’ll settle in for a Christmas movie along with the wine and chocolates Billy left behind. Once Billy returns, Victoria will greet him with a hug and will gush about him being the perfect husband. She’ll suggest she knew that with a little hard work, they’d uncover the real him. Billy will look distant and uncomfortable as Victoria pulls him closer.

Over with Abby Newman (Melissa Ordway), she’ll have a conversation with Nate about their friendship. Nate will think they’re still friends, but Abby will counter that they’re just friendly. She’ll concede that she was being bratty before, but she’ll want to make peace and be genuine pals.

Back with Devon, he’ll make his way to the Grand Phoenix and casually try to find out if Amanda’s still staying there. Abby will note that Amanda tends to keep to herself, but she apparently has plans this evening. Afterward, Devon will prepare to do a “Ripley Turner” search on his phone.