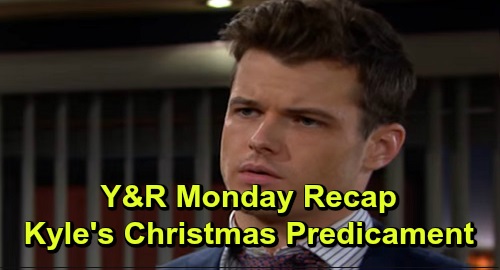 The Young and the Restless (Y&R) spoilers for Monday, December 23, tease that some great moments are on the way. We should mention that preemptions have been throwing off Y&R’s schedule a bit. This episode was originally set for Friday, but has now been pushed back to Monday. However, it’ll all happen eventually, so we might as well dive in and see what’s going on in Genoa City!

At the Abbott mansion, Jack Abbott (Peter Bergman) and Traci Abbott (Beth Maitland) will invite Theo Vanderway (Tyler Johnson) in for a visit. They’ll fill Theo in on some holiday traditions, and he’ll offer some Christmas treats in return. Talk will turn to the deal Theo recently made for Jabot. Jack will be glad to hear everything went well. He’ll also believe Theo and Kyle Abbott (Michael Mealor) can work through their rough patch and figure out a way to coexist at work.

The Young and the Restless spoilers say Theo will receive an Abbott family history book. Jack and Traci will assure Theo that it’s his history now, too. They’ll let Theo know he’s welcome to come over on Christmas Day, but Theo will want to see how it goes. After munching on the holiday treats, they’ll all toast to family traditions – both old and new.

At Kyle and Lola Abbott’s (Sasha Calle) apartment, Kyle will return with a Christmas tree. He’ll score a laugh from Lola when she learns it got stuck in the hallway. Lola will also have some cookies fresh from the oven. Kyle and Lola will end up admiring the ornaments Jack and Celeste Rosales (Eva LaRue) sent over. There are ornaments from their childhoods as well as one to celebrate their first Christmas as husband and wife. They’ll make love before Kyle declares it’ll be the best Christmas ever.

At Society, Phyllis Summers (Michelle Stafford) will gush over Summer Newman’s (Hunter King) birthday and make it known to the rest of the patrons. They’ll ave some wine as they talk about Summer’s job and how things are going with Kyle and Theo. After Phyllis brings up a dagger to the heart, Summer will wonder what she’s talking about. Phyllis will suggest she was just reflecting on the ghosts of Christmases past. She’ll note that she not longer shares a friendship with Adam Newman (Mark Grossman).

The conversation will shift to the Christmas tree Summer decorated in Phyllis’ suite. Phyllis will express her gratitude and enjoy the fact that her presence at the hotel irritates Abby Newman (Melissa Ordway). Y&R spoilers say Summer will open up her gift from Phyllis next. She’ll be pleased over the earrings Phyllis selected.

Phyllis will step away for a moment, so that’ll leave Summer to check her texts. She’ll smile as she reads birthday wishes from Jack, Kyle and Theo. Once Phyllis returns, they’ll enjoy a dessert that was flown in from a bakery in Paris. Phyllis will assure Summer that she’s still the best early Christmas present she ever got.

At the ranch, most of the Newmans will gather for an early Christmas gathering. Since Victoria Newman (Amelia Heinle) and Billy Abbott (Jason Thompson) are headed to Telluride with the kids, they’ll be glad they could come together in advance. Victor Newman (Eric Braeden), Nikki Newman (Melody Thomas Scott) and Nick Newman (Joshua Morrow) will also be on hand as Victoria talks up Billy’s new consulting job. She’ll feel like things are really falling into place for all of them.

After Billy receives a text from Amanda Sinclair (Mishael Morgan), he’ll suggest he should go check on the kids. Victor will tag along, so that’ll leave Nick to chat with Victoria and Nikki about Chelsea Lawson (Melissa Claire Egan). He’ll admit that although they enjoyed their evening together, Chelsea still went back to Adam’s place. Nick will assure Nikki and Victoria that he has hope for his future with Chelsea.

Once Victor and Billy rejoin the gang, Victor will make a sweet speech about his family. He’ll also put on Nikki’s favorite Christmas tune and share a dance with her. The Young and the Restless spoilers say Nikki and Victor have more holiday fun coming up. We’ll give you updates as other Y&R news emerges. Stick with the CBS soap and don’t forget to check CDL often for the latest Young and the Restless spoilers, updates and news.