BY hellodrdavis on December 18, 2019 | Comments: one comment
Related : Soap Opera, Spoiler, Television, The Young and the Restless 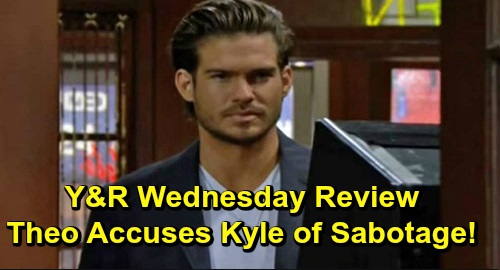 The Young and the Restless spoilers review for Wednesday, December 18, tease that Theo Vanderway (Tyler Johnson) will pitch marketing ideas to Summer Newman (Hunter King) and Jack Abbott (Peter Bergman) at Jabot. When Jack mentions closing a big deal, Theo will say that the meeting is tomorrow, but suddenly Kyle Abbott (Michael Mealor) will breeze in and say that the meeting was actually today, and Theo missed it.

Theo will then get on the phone and salvage the deal, angry with Kyle for having “handled” the mix up in Theo’s absence. Jack will think that Theo made a nice save, but Theo will be infuriated and will privately accuse Kyle of setting him up. Kyle will push back, mocking Theo about the deal being “epic” and saying that he screwed up all on his own and didn’t need any help to do it.

Later, Summer and Kyle will talk about the incident at the Grand Phoenix. Kyle will want Summer’s opinion on the matter, and although she’ll try to stay neutral, Kyle will press and she’ll eventually say that she didn’t think Kyle tried to sabotage Theo, but that he didn’t deal with the problem in the most constructive way possible. Summer will advise Kyle to not let his personal feelings get in the way of how he manages Theo.

Meanwhile, on the new episode of Y&R on Wednesday, December 18, Billy Abbott (Jason Thompson) will struggle as Victoria Newman (Amelia Heinle) hurriedly prepares for work. He’ll tell himself to just keep smiling and “fake it till you make it.” He’ll tell Victoria over breakfast that he got a consulting job with a Chicago-based company. She’ll ask if he is excited about it, and he’ll say yes, although privately he’ll wonder if he really is.

Billy will then head to Crimson Lights, where he’ll encounter Amanda Sinclair (Mishael Morgan). They’ll sit together and remark that they must be friends now. After a little conversation, Amanda will bluntly ask if Billy’s looking to have an affair. Billy will deny it and they’ll have a lively conversation about friendship and whether men and women can really be friends.

Turns out, Amanda won’t be looking for an affair either, and they’ll keep talking about their lives. Amanda will point out that Billy is married, and Billy will verify that he’s happily married and that on paper things seem perfect.

Back at home, Billy will suggest to Victoria that they go spend the night in Chicago and shake things up. Victoria will say that although the offer is tempting, she can’t do it, and that “that’s not where we are right now.” Billy will wonder to himself what that means. He’ll tell himself to be convincing as he tells Victoria that he was just kidding about the trip.

Later, Billy will be sitting alone, drinking, and he’ll decide to text Amanda. He’ll send her the definition of “friend.” Amanda will get the text, smile, and send back a thank you, thanking Billy for the vocabulary lesson. Billy will down some of his drink and smile. Clearly, the two are interested in having some sort of relationship with each other, even though they’ve denied wanting to have an affair.

Finally, Devon Hamilton (Bryton James) will bid Elena Dawson (Brytni Sarpy) farewell for the day, but before doing so he’ll hide Amanda’s dossier underneath the minibar in his penthouse. Elena will notice but won’t say anything, and after he’s gone, she’ll go get the dossier and take a look.

Elena will then talk to Nate Hastings (Sean Dominic) at Crimson Lights. She’ll say that she’s concerned that he may have been wrong about Amanda this whole time. Nate will be express his own concern that she’s becoming obsessed. He’ll wonder where all of this is coming from, and he’ll even say that perhaps Devon is looking for an excuse not to let it go. Elena will nearly tell him about the dossier but will instead insist that Amanda has secrets and could be dangerous.

Devon will head to the Grand Phoenix, where he’ll find Amanda and immediately start in on her. He’ll say that his attorney advised him to take legal action against her, and she’ll tell him to go right ahead and that he has no legal grounds. They’ll bicker back and forth, and ultimately he’ll head home and discover that the dossier has been moved. He’ll take off out of the penthouse looking for Elena.