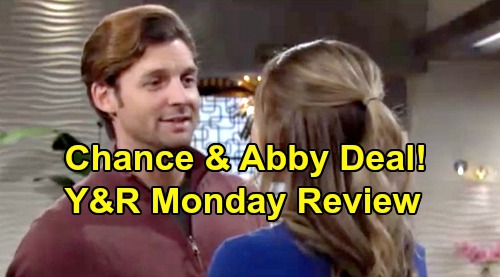 The Young and the Restless spoilers review for Monday, December 9 tease that Abby Newman (Melissa Ordway) will have some serious explaining to do. As Y&R viewers know, Chance Chancellor (Donny Boaz) has just busted Abby with a bagful of jewels at the Grand Phoenix. Abby will hurriedly explain that the jewels are all fake that the thefts were all a big sham to get rid of Phyllis Summers (Michelle Stafford).

Chance will then muse that he helped her with her little plot to smoke out the thief, and Abby admitted that it was a gamble, but that it paid off because he ultimately gave her the evidence she needed to prove that Phyllis messed with the security software. She’ll say that lying to him was the hardest part of her scam, and Chance will think that it took a lot of nerve for her to pull the whole thing off.

Abby and Chance will then start flirting, and Chance will reveal that he had been onto her from the start. He’ll playfully suggest that she keep her day job as manager of Society and the Grand Phoenix. Abby will think that they should toast to their good teamwork over some champagne, and after some more flirting, Abby will offer Chance a job as head of security. Chance will say that he’ll think about it, and Abby will go to get some champagne.

One wonders whether Phyllis will ever find out about Abby’s little scheme, and what the ramifications will be if she does. Phyllis is already looking for lawyers to take on a wrongful termination lawsuit, and despite being turned down by Amanda Sinclair (Mishael Morgan) in Monday’s episode, she’ll probably look for representation elsewhere. And if she learns about Abby’s deceit, then that could certainly be something that could make Abby look pretty bad in the case.

Meanwhile, on the new episode of Y&R on Monday, December 9, Devon Hamilton (Bryton James) will sneak up behind Amanda at Society, who will quickly snap her laptop shut. Turns out, Amanda will have been looking at a tracking system on her laptop and will just have had a conversation with someone via phone about how the tracking signal for “him” had been lost.

Devon will blast Amanda over the usual issues, saying that he wants his money and that she played on his emotions. She’ll give back as good as she gets, wondering aloud if she should file a restraining order before asking him to leave. Devon will then notice that Elena Dawson (Brytni Sarpy) witnessed the whole exchange front he entryway. Elena will take off, with Devon in hot pursuit.

He’ll catch up with Elena at Crimson Lights, where the two will argue. Elena will be upset that he seems too focused on Amanda, and Devon will go through all the reasons he has to be angry with her. He’ll say that he wants Amanda to just leave, but now she’s hanging out with Nate Hastings (Sean Dominic). Elena will ask Devon if he’s attracted to Amanda, which he’ll vehemently deny, and Elena will then say he’s obsessed with her and that it’s not healthy.

They’ll keep bickering and Devon will wonder if Elena wants out of the relationship, but Elena will say that he’s the one pulling back, not her. Ultimately, she’ll ask him what he wants – her or to stay in the past with his anger. He’ll be irritated that this sounds like an ultimatum, and she’ll say that it’s simply a wakeup call before walking out.

Elena will then head to Society, where she’ll approach Amanda and want to talk. Amanda will bristle at the thought, but Elena will say that she’s been unkind and unforgiving, and that this isn’t who she is. Amanda will offer understanding and say that she knows what it’s like to get swept up in a situation and lose perspective. Elena then said that she believes Amanda’s assertion that she was blindsided and not a part of the will scam.

Ultimately, Elena asked to start fresh, and Amanda will accept. Before she leaves, Elena will ask if there was something on Amanda’s computer that was upsetting her, and Amanda will simply say that it was just some loose ends she was dealing with from back home. As Elena walks away, she’ll notice Devon watching from the entryway, who will wonder what she and Amanda were doing.

Elena will tell Devon that they were having a civil conversation, and that he should try it sometime. Elena will then leave, with Devon following after her. And at her table, Amanda will take a call from someone and the two will discuss that the tracking signal was back and that “he” was exactly where he should be. It’s certainly looking more and more like Amanda had a stalker in the past, and that she could be planning a quiet escape from the person in Genoa City.