BY Heather Hughes on January 4, 2019 | Comments: one comment
Related : Soap Opera, Spoiler, Television, The Young and the Restless 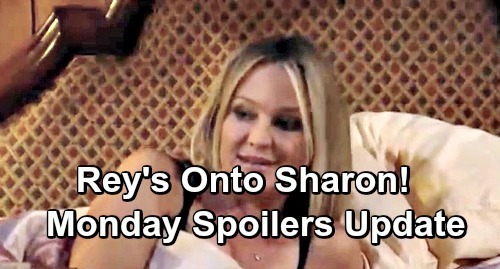 The Young and the Restless (Y&R) spoilers update and recap for Monday, January 7, tease that Mia Rosales (Noemi Gonzalez) will share some lovey-dovey moments with Rey Rosales (Jordi Vilasuso) before he leaves for work. Afterward, Mia will get a shock as she comes out of the shower. Arturo Rosales (Jason Canela) will be there to fix the furnace, so he’ll mention that Sharon Newman (Sharon Case) offered a key.

Mia and Arturo will argue, but they’ll assure each other they’re happy in their respective relationships. Arturo will be glad there’s no drama in his romance with Abby Newman (Melissa Ordway), but Mia will think that sounds awfully boring. Later, things will turn softer as they talk about when they were together. Arturo will admit he’s matured a lot since then.

Mia will be glad that they’re in a better place and can be friends. After Arturo wraps up the furnace repair, Mia will embrace him. She’ll be grateful for everything as he heads out. At Victoria Newman’s (Amelia Heinle) place, she’ll get on the same page with Billy Abbott (Jason Thompson). Victoria will clarify where her head is at and reiterate that she wants to go slow.

Billy and Victoria will end up sharing a kiss as Reed Hellstrom (Tristan Lake Leabu) walks in. He’ll seem irritated that Victoria is already moving on from his dad. Victoria and Billy will point out that they’re not really together yet. They’re just figuring things out. Y&R spoilers say Reed will note that he was just surprised. He likes Billy, so it appears this won’t be a huge issue for him.

Next, Victoria will encourage Reed to head back to school. Reed won’t want to leave when Victor Newman (Eric Braeden) is still facing murder charges. Later, Victoria will push Reed to believe in Victor’s innocence. Talk will turn to J.T. Hellstrom (Thad Luckinbill) and how Reed never got to say goodbye to him. He’ll think they should have a memorial service, so Victoria will give him the green light.

Other Young and the Restless spoilers say Mariah Copeland (Camryn Grimes) will catch up with Sharon. They’ll argue about Victor and whether he belongs behind bars. It seems Tessa Porter’s (Cait Fairbanks) view sunk in because Mariah will now think maybe it’s karma. She’ll suggest that Sharon should leave this alone since Victor will never be convicted anyway.

Later, Sharon will talk to Rey about Victor’s arrest. She’ll wonder if he’s really caught the culprit, which will leave Rey suspicious. He’ll feel like Sharon doesn’t want this case to be solved, but Mariah will interrupt. She’ll pipe up that Rey’s being ridiculous before bickering with Sharon again in private. Mariah will think her mom’s going to make trouble for herself, but Sharon will believe she’s got this.

Once Rey returns and Mariah leaves, Sharon will backtrack a bit. She’ll claim her concern is only about Nikki Newman (Melody Thomas Scott) and Rey. Sharon will point out that Victor can hold a grudge, but Rey won’t be worried. He’ll add that he wouldn’t let someone innocent get locked up for murder.

Meanwhile, Nikki will visit Victor. She’ll be awfully weak, but she’ll insist that there’s something he needs to know. Nikki will confess to being drunk at the time of the hit-and-run. She’ll argue that she started this mess and Victor will bring up the stress over J.T. That’ll lead Nikki to admit that she knows who killed him, but Victor will push her not to speak of it ever again.