BY Heather Hughes on June 14, 2019 | Comments: one comment
Related : Soap Opera, Spoiler, Television, The Young and the Restless 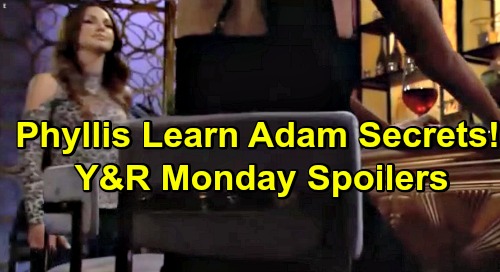 The Young and the Restless (Y&R) spoilers for Monday, June 17, tease that Adam Newman’s (Mark Grossman) war with his brother will take a risky turn. Adam clearly thinks he knows what’s best when it comes to Christian Newman (Jude and Ozzy McGuigen). He’s not considering what it’d do to the kid if he ended up ripped out of Nick Newman’s (Joshua Morrow) arms and hauled away from his home.

Nick pointed out that Adam could’ve taken the time to get to know Christian. Instead, Adam’s tossing around threats and making demands. It seems like part of Adam is simply concerned with winning, which sounds a lot like Victor Newman (Eric Braeden). Nevertheless, there’s another part of Adam that just wants to feel close to another human – and perhaps feel needed as well.

All of that will add up to Adam officially suing for full custody. It looks like Nick will be served with the papers on Monday, so he’ll be more enraged than ever. Y&R fans can expect Nick to fight back in a big way. He’ll decide there’s only one person who could potentially convince Adam to stand down, and that’s Chelsea Newman (Melissa Claire Egan).

The Young and the Restless spoilers say Nick will contact Chelsea and beg for her help. He’ll hope to beat Adam at his own manipulation game, but this could be a bad idea. Chelsea and Adam’s connection could come rushing back and leave Nick in need of another plan down the road. For now, Nick will just be looking for any possible way to stop Adam from taking his son – and Chelsea’s all he’s got.

In the meantime, Michael Baldwin (Christian LeBlanc) won’t back off. He’ll refuse to let Kevin Fisher (Greg Rikaart) keep him in the dark on his secret plans and apparent blunders. Kevin will be forced to spill all, so you can bet Michael will be floored by the situation with Chloe Mitchell (Elizabeth Hendrickson) and how Phyllis Summers (soon-to-be Michelle Stafford) got caught up in it.

In Las Vegas, The Young and the Restless spoilers say Riza Thompson (Tina Casciani) will return to answer Phyllis’ questions. She’ll appear in more scenes this Monday, but some camera trickery may keep Phyllis’ face offscreen a bit longer. However, it does look like we’ll get our first glimpse of Michelle Stafford’s Phyllis again before the week’s over.

Phyllis will be seeking vengeance and power, so turning to Riza is a smart move. No one knows more about Adam’s life outside of Genoa City than Riza, so there’s plenty of dirt just waiting to be found.

We’ll give you updates as other Y&R news emerges. Stay tuned to the CBS soap and don’t forget to check CDL often for the latest Young and the Restless spoilers, updates and news.