The Young and the Restless Spoilers: Week of June 17 Preview – Adam Sues for Full Custody of Christian – Phyllis’ Vegas Revenge

BY Heather Hughes on June 13, 2019 | Comments: one comment
Related : Soap Opera, Spoiler, Television, The Young and the Restless 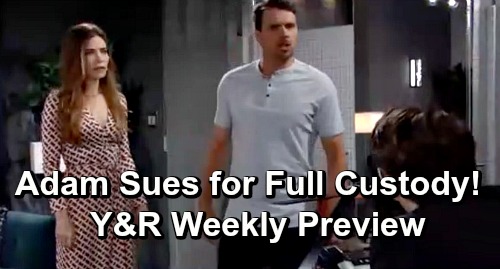 The Young and the Restless (Y&R) spoilers preview for the week of June 17-21 tease that some shocking moves are coming up. For starters, Adam Newman (Mark Grossman) will decide he’s done delivering threats. He’ll feel like he’s given Nick Newman (Joshua Morrow) a chance to do this the easy way. Now Adam intends to play hardball, which means a court battle is about to begin.

At Dark Horse, Nick will confront Adam about his push to take Christian Newman (Jude and Ozzy McGuigen) away from him. As Victoria Newman (Amelia Heinle) arrives, Nick will snarl that he ought to take those papers and shove them right down Adam’s throat. He’ll let Victoria know that Adam’s suing for full custody, so she’ll join Nick in ripping into their brother.

Victoria thought she could gain the upper hand by giving Adam $50 million and Chelsea Newman’s (Melissa Claire Egan) phone number, but she made matters worse. Adam was able pony up the money to cover Dark Horse’s loan debt, so now he’s taken Nick’s company and just might take his son. Since Nick could lose Christian anyway, Victoria’s deal clearly hurt instead of helped.

However, Nick will contact Chelsea and try to get her on his side. He’ll hope Adam’s ex can be a secret weapon in the fight against him. At the cemetery, a tortured Adam will visit Delia Abbott’s (Sophie Pollono) grave. Adam may be ruthless, but he’s definitely got remorse about what happened to Delia and how he handled it. A little girl is dead, so Adam’s not so heartless that he can forget that.

The problem is Billy Abbott (Jason Thompson) can’t forget his rage toward Adam either. When he spots Adam by Delia’s grave, he’ll immediately object. Billy will argue that Adam’s the reason Delia’s there, so he won’t think it’s appropriate for he killer to be popping over.

Of course, Adam may remind Billy that it was an accident – and one he’ll always regret. Too bad Adam’s regrets don’t mean anything to Billy. His grief and anger have come roaring back since Adam resurfaced, so Y&R fans can expect Billy to get fierce this week.

Finally, Phyllis Summers (Michelle Stafford) will arrive in Las Vegas and seek help from Riza Thompson (Tina Casciani). Next week’s Young and the Restless preview video shows Riza saying, “Do tell. Why the sudden interest in Adam Newman?” Phyllis will undoubtedly assume Adam was the reason for the kidnapping drama, but she may dance around the topic of the revenge she wants.

Stafford’s return is rapidly approaching, but her face doesn’t appear in the clip. The Young and the Restless spoilers say they’ll want to save that for their main promo. They may keep showing Phyllis from the back for a few scenes, but Stafford will be seen onscreen before long.