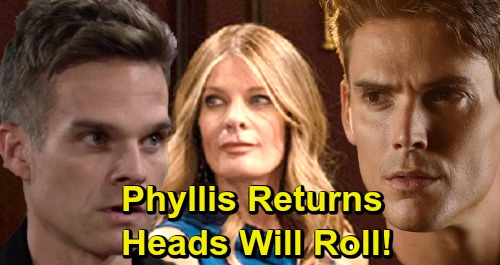 The Young and the Restless (Y&R) spoilers tease that Michelle Stafford’s return as Phyllis Summers is rapidly approaching. We know Phyllis is set to encounter Chloe Mitchell (Elizabeth Hendrickson) soon, but Y&R may get creative with the camerawork there. Fans might see things from Phyllis’ perspective briefly since it seems this will happen before Stafford’s big comeback.

However, The Young and the Restless spoilers say Phyllis will return for vicious revenge during the week of June 24-28. She obviously won’t be happy about this little forced hostage vacation! That’s especially true since there was no need for her to get caught up in this at all.

Adam Newman (Mark Grossman) doesn’t care about Phyllis, so there were certainly far better hostages for Kevin Fisher (Greg Rikaart) to pick. Phyllis will undoubtedly be furious with Kevin as well as Adam for starting this mess. Naturally, Phyllis won’t have forgotten about her Abbott and Newman grudges either. In fact, she’s probably only grown more enraged.

Phyllis has surely had a lot of time to sit and think about how much she hates these people. She’s probably filling the hours by plotting vengeance. Phyllis will also take note of who actually noticed and missed her while she was gone. This will hopefully help Phyllis and Summer Newman (Hunter King) patch things up.

Since it looks like Nick Newman (Joshua Morrow) will get more involved before Phyllis returns, maybe the tension could start to lift for them, too. It certainly won’t evaporate overnight, but progress is possible. Nick and Stafford’s Phyllis were a popular pairing years ago, so it makes sense for Y&R to start inching them toward a reunion. They’ll surely put classic “Phick” back together eventually.

Of course, the real draw at first will be checking out Stafford in the role again and seeing if the magic’s still there. It’s an interesting situation since there was so much fan outrage over Gina Tognoni’s firing – and rightly so. The Young and the Restless did Tognoni dirty! Stafford will have to get people on her side again, so let’s hope her familiar spunk and spark can make it happen.

Are you eager to see Stafford’s comeback or are you still bitter about Tognoni’s forced exit? We’ll give you updates as other Y&R news comes in. Stay tuned to the CBS soap and don’t forget to check CDL often for the latest Young and the Restless spoilers, updates and news.