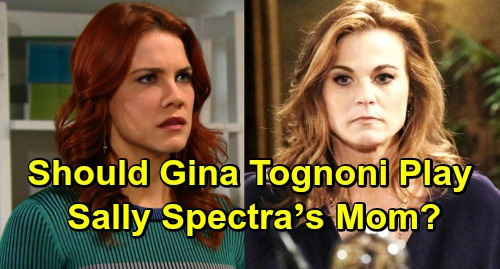 The Bold and the Beautiful (B&B) spoilers tease that the baby swap storyline will heat up over the next couple months. After a shocking death and some huge twists, we all know the outcome will be. Hope Logan (Annika Noelle) will get her little girl back and B&B can play the wild aftermath. Nevertheless, the CBS soap might want to go ahead and start thinking about their next big story.

After all, this baby drama can’t go on forever. It’s going to wind down sooner or later and they’ll need something new when it does. We’ve seen plenty of Hope and Steffy Forrester (Jacqueline MacInnes Wood) material lately, but what about Sally Spectra (Courtney Hope)? Her talent doesn’t seem to be appreciated as much as it could be at B&B.

There’s a way to give Sally a gripping storyline AND put a recently fired The Young and the Restless actress back to work on CBS daytime. In fact, one current Young and the Restless star supports this idea. What if Gina Tognoni (ex-Phyllis Summers on Y&R) headed over to play Sally Spectra’s mom on The Bold and the Beautiful? You really couldn’t get more perfect casting since Tognoni and Courtney Hope look so much alike.

There were once rumblings about Hope possibly stepping in as a Summer Newman recast over on The Young and the Restless. However, Hope later admitted she was never contacted about that. Hunter King ended up being able to work out a Young and the Restless comeback, but the speculation was interesting for a while. Many soap fans agreed Hope could’ve easily passed for Tognoni’s character’s daughter.

Now B&B has a chance to make that a reality. This is the ideal soapy setup since Sally has a lot of pain in her past. She was raised by her grandmother, Shirley Spectra (Patrika Darbo), and has talked about her parents spending time in prison. This could be the classic scenario of estranged Mom reenters the picture and burned daughter wants nothing to do with her.

Perhaps Sally’s success at Forrester Creations could be what brings her mother to town. She might want to make amends…or mooch off Sally’s profits! As far as love interests go, there’d be some good options. Ridge Forrester (Thorsten Kaye) is quite the ladies’ man and his marriage to Brooke Forrester (Katherine Kelly Lang) seems destined to fall apart.

Nevertheless, it’s Bill Spencer (Don Diamont) that we’d root for in this case. Can you imagine Bill heading back to the dark side with Sally’s fierce mom by his side? They’d make an awesome power couple. This would be a great direction to head in down the road.

Doug Davidson (Paul Williams on Y&R) seemingly agrees Tognoni would be the perfect fit for the role. He recently sent out some tweets praising Tognoni before retweeting some fans who supported the idea of Tognoni as Sally’s mom. It’d certainly be nice to see Tognoni back on a CBS soap. Many Y&R viewers miss her already!