The Young and The Restless Spoilers: This Is Allegedly Why Gina Tognoni Was Fired as Phyllis and Replaced by Michelle Stafford 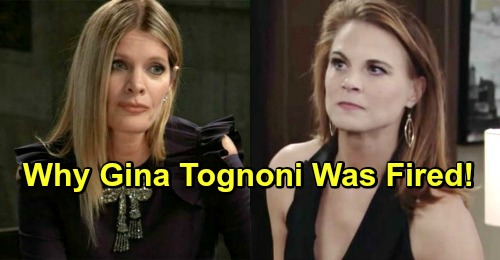 The Young and the Restless (Y&R) spoilers tease that a casting shakeup stunned the fans. Michelle Stafford (Nina Reeves, GH) would return to the role of Phyllis Summers in the summer. It was a casting decision that shocked the viewers as they were happy with Gina Tognoni’s version of Phyllis. Even so, Gina was out of a job and Michelle would return.

The question many fans asked over and over was why? Why did Gina lose her job so Michelle could come back? For many, it didn’t make sense. Why would they fire an actress who was doing a wonderful job to hand a job to Michelle, the one who claimed she was “done” with being Phyllis.

The answer was simple according to an article in the most recent issue of SOD, if not entirely convincing to CDL. When Josh Griffith took over as head writer when Mal Young stepped down, he vowed to make Y&R a show the fans recognize. And, part of that change, he wanted to bring actors back that the fans loved and associated with the “good ‘ol days” with the soap opera. But Gina had been in the role for years… and was totally accepted as Phyllis…

That is the main reason, according to the SOD article, that Doug Davidson returned as Paul Williams. And, Griffith hopes he can write compelling material for Ashley Abbott so Eileen Davidson pops into Genoa City often, too.

So the party line is that it wasn’t an insult to Gina’s performance as Phyllis, or to the actress personally. The reason she was let go was Josh wanted to bring Michelle’s version of Phyllis back. And, he hopes that will rake in more ratings for the show and restore the viewers’ faith in the writing team.

As for Gina, she will land on her feet again. She hasn’t mentioned if she is going to look for another daytime role or if she will branch out to prime-time. However, it works, the Y&R fans are excited to see what she tries next and they wish her the best.

As for Michelle, it will be exciting to see how Josh and the rest of the Y&R writing team plans to bring the old Phyllis back.