The Young and the Restless Spoilers: Monday, May 20 Recap and Preview – Adam Call Victor Dad After Surgery – Mia and Arturo Leave Town

BY Heather Hughes on May 17, 2019 | Comments: 3 comments
Related : Soap Opera, Spoiler, Television, The Young and the Restless 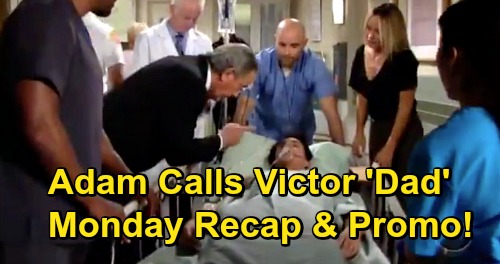 The Young and the Restless (Y&R) spoilers for Monday, May 20, tease that Sharon Newman (Sharon Case) will rush to the tack house after hearing a gunshot. Once she finds Adam Newman (Mark Grossman) bleeding on the floor, Sharon will reassure him and call for help.

Later, Adam will be brought in while Sharon talks to Paul Williams (Doug Davidson). He’ll comment on the fact that Adam really is alive. Sharon will hope Adam’s doctors can keep it that way. Soon after, a distraught Victor Newman (Eric Braeden) will get updates. He’ll desperately want Adam to survive his emergency surgery.

In Phyllis Summers’ (Gina Tognoni) hotel suite, she’ll be busy working on her launch. Once Summer Abbott (Hunter King) arrives, Phyllis will shut her laptop and seem tense. Summer will want to fix this, so she’ll wonder what it’s going to take. However, she’ll balk when Phyllis suggests Summer should come work for her.

Summer will argue that Phyllis is obsessed with getting revenge. She won’t think it’s healthy, but Phyllis will snap about all the things the Abbotts have done. She’ll once again bring up Summer’s betrayal and contend that her daughter screwed up her plans.

Back with Victor, he’ll send out urgent texts to gather the Newman clan. After Victoria calls her father back, she’ll learn Adam’s been shot. Victor will also put a stop to Paul’s harsh grilling of Sharon. He won’t be happy when a critical Nick Newman (Joshua Morrow) arrives either.

Nick won’t approve of all the chaos Adam’s return has led to. He’ll encourage Sharon to walk away from Adam and all his drama, but that’s obviously not going to happen. The Young and the Restless spoilers say Dr. Nate Hastings (Sean Dominic) will eventually deliver good news. He’ll fill Victor with relief when he reveals that Adam’s going to be just fine.

At Jabot, Jack Abbott (Peter Bergman) will suggest Kyle Abbott (Michael Mealor) needs a new role at the company. He’ll think she should use his talents in a different way, but Kyle will guess Summer’s to blame for this. Next, Billy will show up ranting about Adam being alive. A stunned Jack will be eager to see him, but Billy will note that Adam claims to have amnesia.

After Jack and Billy bicker about Adam, Kyle will turn his dad’s attention back to his job. He’ll feel like he’s being demoted because of Summer, but Jack will point out there are benefits. This adjustment will allow Kyle to spend more time with Lola Rosales (Sasha Calle).

When Summer arrives later, Kyle will insist she got what she wanted. However, he’ll concede it might be for the best. Kyle will feel like Summer’s going to find her perfect match someday, but she’ll want to focus on the corporate world first. Once their chat wraps up, Summer will visit Jack. She’ll give him a warning about Phyllis’ mentality and worry about what’s in store.

At Crimson Lights, Mia Rosales (Noemi Gonzalez) and Arturo Rosales (Jason Canela) will bid their siblings farewell. They’ll be apologetic and grateful for the outcome of all the mayhem. Rey Rosales (Jordi Vilasuso) won’t be receptive at first, but he’ll ultimately hug Arturo with a nudge from Lola.

Arturo will get a hug from Lola as well, but she’ll urge Mia not to pull the same old stunts with her brother. Lola will push them to keep in touch about the baby and get choked up as they exit. She’ll text Kyle to come support her, but she’ll find that he’s already arrived.

At the tack house, Paul will investigate with a detective. The cash stash will let them know robbery wasn’t the motive. Someone set out to harm Adam, but Paul will think Adam himself is their best chance at solving the mystery.

Back at Crimson Lights, Victoria and Nick will mull over the Adam situation. They’ll talk about whether Adam deserves another opportunity to prove himself. After Billy walks in and hears about the shooting, Nick will wonder if Billy was behind it.

Once Victoria assures Nick that Billy was with her, Nick will be questioned about his own alibi. He’ll assure Billy and Victoria that he was with Christian Newman (Jude and Ozzy McGuigen).

Victoria will seemingly take pity on Adam and contemplate giving him another chance. Billy won’t think that’s a good idea, and he just might be right! For now, Adam will awaken in the hospital with Victor by his side. He’ll refer to Victor as “Dad,” so his returned memory should warm Victor’s heart.