BY Heather Hughes on May 3, 2019 | Comments: 2 comments
Related : Soap Opera, Spoiler, Television, The Young and the Restless 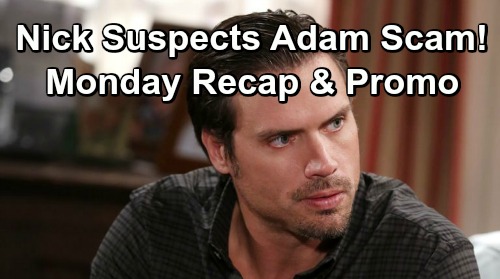 The Young and the Restless (Y&R) spoilers for Monday, May 6, tease that Victor Newman (Eric Braeden) will explain the Adam Newman (Mark Grossman) situation. He’ll stun Sharon Newman (Sharon Case) with the news that Adam’s alive and part of an underground gambling ring. Victor will mention that Adam goes by “Spider” now and has no recollection of anything prior to the explosion.

Since Victor and Dr. Calhoun haven’t been able to help, Victor will want Sharon to see what she can do. He’ll point out that Adam was madly in love with Sharon once upon a time. Sharon won’t like the idea being used as bait, but Victor will try tugging at her heartstrings. He’ll ask Sharon to look at this as a parent and understand what this would mean to him.

After Victor leaves Sharon to mull it over, she’ll give Rey Rosales (Jordi Vilasuso) updates. He won’t get why Victor thinks Sharon would be helpful here, but she’ll just shift the focus to Nick Newman (Joshua Morrow). Sharon will worry about how all of this will affect him.

Back in Genoa City, Nick will bump into Nikki Newman (Melody Thomas Scott) while out jogging. She’ll admit she tasked Rey with finding out what Victor’s up to, which Nick will think is good idea. At Devon Hamilton’s (Bryton James) penthouse, he’ll ask Jett Slade (Gilbert Glenn Brown) about Elena Dawson’s (Brytni Sarpy) dead mother. That’ll bring a heartbreaking story about Elena’s guilt.

Jett will admit that Elena was at work when her ill mom fell and hit her head at home. Elena mother’s death obviously wasn’t her fault, but that hasn’t stopped her from blaming herself. At Crimson Lights, Mariah Copeland (Camryn Grimes) will seem uneasy about the disturbing text she received. Tessa Porter (Cait Fairbanks) will pick up on the odd vibe, but Mariah will leave her out of the loop.

Y&R spoilers say Mariah will give Tessa a guitar strap as a good luck gift. She’ll think Tessa’s going to do great at her recording session, but things won’t turn out that way. At the studio, Tessa won’t be able to please Ana Hamilton (Loren Lott). She’ll have a coughing fit along with a timid take of the song, so Ana will get fed up. The harder Ana pushes, the more flustered Tessa will get.

Ana will eventually make it clear that this isn’t working before she ends the session abruptly. At the cottage, Mariah will be there picking up some papers when Nick appears. She’ll fill him in on Sharon’s trip to Las Vegas with Rey, which he won’t approve of. Nick will feel like Rey’s just roped Sharon into all this.

Next, a distraught Tessa will show up. She’ll tell Mariah about the disastrous recording session, but Mariah will give her a pep talk. Back with Ana, she’ll gripe to Devon about Tessa’s blunders in the studio. He’ll believe Ana just didn’t give Tessa enough time to warm up and find her groove. Devon will think it’s Ana’s responsibility to be a problem solver and know what her artists need.

Later, Devon will have a meeting with both Tessa and Ana. He’ll encourage them to respect each other and find a way to work this out. Tessa will get back in the studio – this time without any pressure or constraints. She’ll give a solid performance, so Ana will offer an apology and a hug for how she treated her earlier.

Other Young and the Restless spoilers say Mariah will run into Elena and ask about her relationship with Devon. Elena will get the feeling that Mariah’s being protective of her friend. Afterward, Elena will head home and learn Devon’s been grilling Jett about her mother. She’ll think Devon overstepped, but he’ll vow to not let it happen again.

Back at the coffeehouse, Mariah will catch a guy staring at her. She’ll ask if he’s got a problem, so he’ll get up and leave. At Nick’s place, he’ll get a shocking phone call from Sharon. She’ll give Nick the scoop on Adam, but he’ll struggle to believe it. The Young and the Restless spoilers say Nick will fear this is a scam artist or maybe a lookalike.

Sharon will believe this Adam’s the real deal since Victor recruited her. Nick will worry about what his father’s dragging her into. He’ll fret about how Adam might affect Sharon as well, but she’ll move forward with the plan anyway. Once Sharon ends the call, she’ll be overwhelmed as she talks to Rey. Sharon will feel like Victor’s asking a lot of her since she loved Adam and is now starting a new relationship.

Nevertheless, Sharon won’t think she can just leave Victor on his own. She’ll call Victor and insist that she’s in. Sharon can’t guarantee this will work, but she’ll promise to do whatever she can to help Adam. Will Sharon’s efforts pay off? We’ll keep you posted as other Y&R details emerge. Stick with the CBS soap and don’t forget to check CDL often for the latest Young and the Restless spoilers, updates, and news.