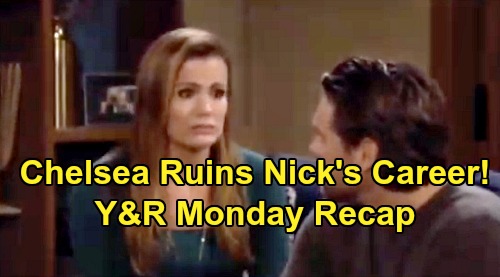 The Young and the Restless (Y&R) spoilers recap for Monday, November 18, teases Abby Newman (Melissa Ordway) will be fed up over all the Grand Phoenix drama. During a conversation with Rey Rosales (Jordi Vilauso), he’ll wish he could’ve done more to help before everything blew up. Abby will insist the cops were great and refuse to act like Phyllis Summers (Michelle Stafford) is a hero in all this. She’ll feel like if Phyllis had been doing her job, she wouldn’t be scrambling to save her hotel…again.

Abby will grumble about Chelsea Lawson (Melissa Claire Egan) getting hooked up with a guy like Simon Black (Jeffrey Vincent Parise). She’ll also want information that could help her push Phyllis out for good. Rey will insist his hands are tied, but he’ll think Kevin Fisher (Greg Rikaart) can answer any technical questions Abby might have about security.

Kevin will end up fishing for information on Chelsea instead. Abby will insist she’s not the biggest Chelsea fan at the moment. She’ll bash Chelsea for bringing a gangster into her hotel and grill Kevin about what’s really going on.

Y&R spoilers say Kevin will downplay his interest in Chelsea and suggest paranoia strikes deep. Meanwhile, Phyllis will show up at Adam Newman’s (Mark Grossman) penthouse and start pouring a drink. Adam will sarcastically suggest Phyllis should make herself at home. Phillip “Chance” Chancellor IV (Donny Boaz) will also be on hand as Phyllis alludes to being watchful about threats from within.

Once Phyllis is urged to get to the point, the discussion will shift to Chelsea. Phyllis will want Chance to tell her if her business partner’s a liability, but he won’t divulge anything about Chelsea and Simon’s link. Chance wouldn’t tell Phyllis even if he knew! It’ll take some work, but Adam will ultimately end the fishing expedition and convince Phyllis to leave.

Phyllis will point out she knows Adam and all his tricks. She’s seen things, so she doesn’t buy his changed act at all. After Phyllis exits, Chance will fret about how much she might know. He’ll wonder if Phyllis found something out in Vegas, but Adam will insist she saw them in a room together and that’s it.

Chance will remind Adam that it wouldn’t be good for them if Phyllis knew what really went down. He’ll agree that Phyllis is just Adam’s problem for now. Chance will urge Adam to make sure Phyllis doesn’t become their problem. Back with Phyllis, her snooping tour will continue as she runs into Kevin. Phyllis will call him “Agent Fisher” and bring up his Feds stunt with Chloe Mitchell (Elizabeth Hendrickson).

The Young and the Restless spoilers say Phyllis will want the scoop on Chelsea, Chance and Simon. She’ll think they’re all linked, but Kevin will refuse to help her figure anything out. He’ll argue that Phyllis is just trying to regain full ownership of the hotel. Next, Phyllis will bicker with Abby as usual. They’ll butt heads over Phyllis’ security system and whatever she might be cooking up.

At Newman Enterprises, Billy Abbott (Jason Thompson) will get frisky with Victoria Newman (Amelia Heinle). Victoria will protest about her conference call, but she’ll eventually agree to mix it up with some office steaminess. Billy will wonder if Victoria’s all right with him showing up there and surprising her. Victoria will praise Billy for being exciting, unpredictable and having a spark nobody else has. She’ll insist Billy’s the love of her life, so he’ll think she’s describing him as both James Dean and Prince Charming.

At the ranch, Jack Abbott (Peter Bergman) and Nikki Newman (Melody Thomas Scott) will have a strategy session for Nick Newman’s (Joshua Morrow) campaign. They’ll agree it’s best to ride it out and weather this political storm. As for Victor Newman (Eric Braeden), he’ll be more concerned about Nick’s personal reputation and the damage that’s been done to his character.

At home, Nick will be overwhelmed by all the media attention. He’ll angrily tell a reporter that he has no comment and insist a statement will be coming later. Chelsea will blame herself for the mess, but Nick will promise they’re going to get through this. When Chelsea offers to fall on her sword and take the heat off Nick, he’ll insist that would be a disaster. A media confession could put Chelsea in jail and make his judgment look even worse.

The Young and the Restless spoilers say Chelsea won’t want Nick to accept defeat. She’ll hate the thought of derailing Nick’s dreams, but he’ll ultimately surrender anyway. Nick will call Jack, who’ll still be with Victor and Nikki. He’ll reveal that he’s decided to drop out of the race and focus on his family.

Nick will plan to make his announcement, but can Chelsea change his mind? Should Nick keep fighting when things look so bleak? We’ll give you updates as other Y&R news comes in. Stay tuned to the CBS soap and don’t forget to check CDL often for the latest Young and the Restless spoilers, updates and news.